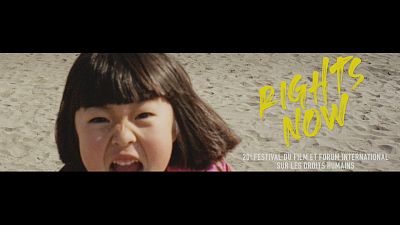 Over a week after Russia invaded Ukraine, a festival dedicated to human rights and cinema has opened in Geneva.

The International Film Festival and Forum on Human Rights (FIFDH) has been running for 20 years, in parallel with the UN Human Rights Council. 2022 marks the return of the festival in-person, after two years of pandemic.

250 guests are expected for this year's edition which will bring together a selection of fiction films, documentaries, high-level debates and major meetings with personalities like Chelsea Manning and Ngozi Okonjo Iweala.

In view of the war in Ukraine, an exceptional debate has been scheduled. On Monday 7 March at 20.00 CET, people from Ukraine will have their voices heard live as well as personalities from the United Nations Human Rights Council in Geneva.

Isabelle Gattiker, the Executive Director of the FIFDH explains that every year they have to make difficult choices: "Some of the themes that are dealt with by the festival are carried by great films that make us want to talk about a theme, and sometimes it is current events that make us look for great films."

It's the festival's 20th edition, which Gattiker describes as already an important event, but it's made even more so due to the "extremely complex conditions" in Ukraine. She adds that the events strengthen the participants' convictions.

Some of the people expected to attend are Rithy Panh and Nabil Ayouch, as well as the Afghan filmmaker Shahrbanoo Sadat. Panar Pahani's film 'Hit the Road' will open the festival which will run until March 13.