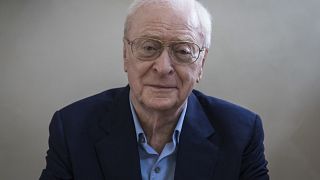 As a consequence, the 88-year-old auctioned off some of his prized possessions at Bonhams auction house in London, on Wednesday evening (2 March 2022).

What was in the sale?

Under the hammer were a wide range of items - from Caine's glasses and cigarette lighters, to bigger items like furniture, as well as a selection of artworks he has spent his life collecting.

Charlie Thomas, Director of Household, Private and Iconic Collections at Bonhams, marked Caine's desk as one of his favorite items up for grabs:

"His desk, of course, is probably the highlight. This is his desk he wrote his three books on. This is a desk he read his scripts at and is covered in sort of ink marks and and you can actually you can see where he's been writing and it's, you know, that's fantastic," he said, speaking before Wednesday's auction.

There are also signed posters from Caine's vast back catalogue of film roles, but perhaps the most interesting items for sale are the more personal possessions:.

"There's the gold Rolex that he's been photographed and filmed wearing for decades. And then there's more whimsical things like his glasses. You know that there's several pairs of his iconic glasses, the thick rimmed ones, the Harry Palmer style ones. He's iconic for so many reasons. But his style is another big part of why he's so popular and, you know, his glasses are part of his style," said Thomas.

Despite the pre-auction estimate for Sir Michael Caine’s gold Rolex being £12,000, the watch ended up selling for a whopping £125,250.

An abstract portrait of Sir Michael Caine painted by John Bratby fetched £31,000, and Caine’s Indian rosewood pedestal desk, where he wrote his books, sold for £12,750.

Where are the items being sold?

Sir Michael Caine's items went up for auction on 2 March 2022 at Bonhams in London.