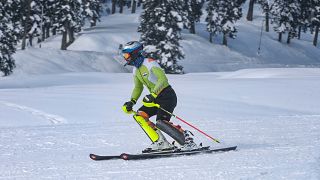 Arif Khan is an alpine skier from India. He made his nation proud by becoming the first Indian athlete to qualify for two different events at the 2022 Winter Olympics in Beijing. When he flew his country's flag at the Olympic opening ceremony, he knew he had achieved something greater than his dreams.

Arif's father, Yaseen, runs a ski shop in Gulmarg, one of Kashmir's largest and highest ski resorts. A part of the western Himalayas, on the Pir Panjal Range, the town is famous for its breathtaking views and perfect powder snow.

When Arif was four years old, Yaseen encouraged his son to take up the sport. Over the years, they trained diligently on the snowy slopes of Gulmarg, dedicating themselves to making it a daily activity in Arif's life.

As a ten-year-old, Arif began competing in the sport. By the age of 12, he had won his first national slalom championship and by 16, he made his international debut at a junior event in Japan. Since then, he has participated in more than 130 international events.

Road to the Olympics

After realising that skiing was much more than a hobby, Arif moved to Switzerland in 2008 to pursue his dream of representing India at the Winter Olympics. While he was there, he trained at world-class European facilities.

"To compete at a world (level), I had to always look at the European countries for training and use that level of infrastructure and the coaches," says Arif.

Skiing is an expensive sport. Most of Arif's funding came from his father's ski shop and his work as an instructor to fund his passion.

In the lead up to the 2018 Winter Olympics, Arif used crowdfunding to cover his training and other expenses, but sadly it wasn't enough. "I missed out on the Olympics by one result, where we are always required to get five results. I had done four and at the last result, I couldn't travel because there was no time and not much funding," he adds.

"Being the only athlete representing 1.4 billion people in the Olympics is a huge thing. It's a different thought," Arif tells Scenes.

Arif has been fuelled by making it to the Winter Olympics despite facing financial hardships and injuries. He persevered and put all his efforts into qualifying. Arif is currently the 10th alpine skier and 13th Indian to participate in the Winter Olympics.

"It is the dream of the entire Kashmir valley, a dream of all Indians. There cannot be a greater joy for us," says Arif's friend, Waseem Bhat.

Arif wants to introduce India to the world as a skiing destination. The country is better known for its sun-drenched climate and love of cricket than winter sports. "People have different perceptions about us, about the people in Kashmir. I want to tell the nation that we are very strong and if we are built up, we can overcome and be the best contenders in the nation," asserts Arif.

Arif Khan finished in 45th position at the 2022 Winter Olympics marking India’s best-ever performance in men’s giant slalom event. He hopes his performance will inspire future generations of winter athletes from across India.