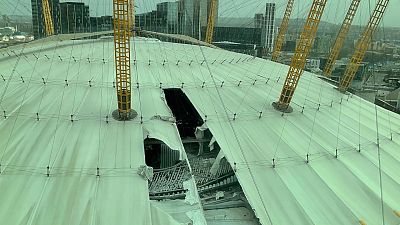 Storm Eunice has torn a huge hole through the roof of London's O2 Arena as the UK records wind speeds of 122mph.

Videos captured by onlookers show a hole forming in the external fabric that creates the venue's iconic dome shape.

The music and dining space in Greenwich, South East London, has been evacuated and closed to the public.

Damage to the structure – which cost £789 million to build – appears to be increasing as the material tears, unable to resist winds that have seen parts of the UK under a strict 'red' weather warning.

"I can see a lot more of the O2 coming off in the next couple of hours. Never seen London so windy," tweeted eyewitness Kevin Edger.

London's iconic O2 Arena - one of Europe's busiest venues - has been badly damaged by Storm Eunice.

Here's what we know so far ?

Tonight's concert at the arena has been cancelled

Tonight's performance by The Fugees for the 25th anniversary of their album 'The Score' has been cancelled.

One of Europe's busiest venues, the 20,000-capacity arena opened in 2007 and recently hosted the Brit Awards.

Its presence on the embankment of the River Thames has cemented it as a landmark of the city.

A sold-out concert by MOBO-winning British rapper Dave is due to take place at the venue on 21 February, with shows from UB40 and The Lumineers in the following weeks.

90s pop group Simply Red, whose concert this weekend was cancelled due to COVID, described the destruction as "tragic".

"As if the music industry hasn't been battered enough," lead singer Mick Hucknall tweeted from his personal account.

The O2 Arena seems to be getting worse by the minute. Storms absolutely battering it now in London it seems. #StormEunice
pic.twitter.com/70zMwhysDt

More and more of the Dome is being shredded pic.twitter.com/EUgyH2ryvK

A representative for the O2 said: “Due to today’s adverse weather conditions, we can confirm that there has been some damage caused to the tent fabric in our roof at The O2."

"The affected areas have been cleared and The O2 will remain closed for the rest of the day. The safety of our visitors remains of paramount importance, and we will continue to assess the ongoing situation and act accordingly.”