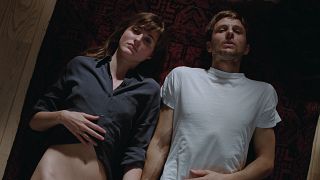 It’s already a history-making film – and Flee, by Denmark’s Jonas Poher Rasmussen, might be European film’s best hope of an Oscar in 2022.

The escape story of an Afghan refugee told through graphic animation, Flee is the first movie ever to be nominated for an Oscar in the Best Documentary Feature, Best Animated Feature and Best International Feature film categories.

It’s not new to use animation when recounting memories of conflict as it can be more powerful, as well as more practical, than live action – Ari Folman’s 2008 film Waltz with Bashir used graphic animation to illustrate the story of the 1982 invasion of Lebanon and was also Oscar-nominated. Angelina Jolie produced another Academy Award-nominated film, The Breadwinner, which is the animated story of an Afghan girl trying to feed her family by disguising herself as a boy.

But Flee feels extremely intimate while tapping into current events. It’s the true story of an Afghan refugee known as Amin Nawabi, who really did turn up in Rasmussen’s small Danish community as a teenager after fleeing from Kabul to Moscow and then to Denmark, and then didn’t tell his story for decades – until now.

When the audience learns the full extent of what Amin had to escape from, and the repression of his sexuality as he grew up in Kabul, the director’s way of telling his friend’s story, and protecting his anonymity is understood.

But Rasmussen has said that during the process of making the film, the ongoing refugee crisis in Europe since 2015 spurred him to make something with wider appeal than just Amin’s story.

“I think the refugee story is often simplified,” he says, “and I’m hoping I can give a lot more nuance to it, and show refugees have complex psychologies like you and me.”

The Nordic countries have come out on top for Europe in this year’s Oscars. Norway’s The Worst Person in the World by Joachim Trier has also made the shortlist for Best International Feature film, and it's also that rare form that is now finding favour with the Academy, a comedy-drama. (Finland also just missed out on getting on the shortlist with Juho Kuosmanen’s Compartment no 6, and it too is a comedy-drama, about two unlikely soulmates who meet on a train.)

Both Compartment no 6 and The Worst Person in the World won prizes at last year’s Cannes Film Festival. In the latter’s case, the Best Actress award went to Norwegian star Renate Reinsve. The movie is also nominated for Best Original Screenplay and it’s easy to see why it appeals (and must also make it ripe for an English-language adaptation) as it’s a story about Julie, a millennial making choices in her career and her love life, learning about who she is in the process.

“Norway has never won an Oscar for a feature film before, so of course, everyone at home is rooting for us,” Trier told trade magazine Variety.

Trier argues he didn’t want to make a statement about what it means to be a woman in the 21st century, but says that he wanted to explore “how relationships mirror our existential expectations of life. In our culture, we are brought up to expect love to be the place where we fulfill ourselves, and the same with careers.”

Italy’s Paolo Sorrentino, whose film The Great Beauty won an Oscar in 2014, has another Best International film nomination this year for his most autobiographical story to date, The Hand of God, released on Netflix.

Set against the backdrop of Diego Maradona’s time at S.S.C Napoli in the 1980s, young Fabietto navigates his youth as he discovers how much he wants to make films. It’s based upon Sorrentino’s family, with the glorious backdrop of the Naples coastline as a feast for the eyes.

But the director’s youth also held huge tragedy, which is only apparent upon viewing the film.

“I would love that the audience takes away a very simple idea that’s inside the film, that in spite of the pain that a person can face, at the end of the tunnel there’s always the chance to see the future in a different way,” Sorrentino told the BBC recently.

Many critics predicted The Hand of God would also make the Best Picture shortlist after Bong Joon-Ho’s Parasite win in 2020 seemed to open the field to films not in the English language.

But instead it’s Japan’s Oscar entry, Ryusuke Hamaguchi’s three-hour epic Drive My Car, which has crossed over also into the Best Picture nominations, as well as taking its place in the Best International Feature film section.

The movie follows a director helming a multi-lingual production of Anton Chekhov’s 'Uncle Vanya' in Hiroshima, while he comes to terms with the death of his wife. Bhutan also has its first-ever Oscar nomination with the film Lunana: A Yak in the Classroom, securing the final place in the Best International Feature Film category.

While Europe has historically dominated international filmmaking at the Oscars – Italy is estimated to have won 14 Oscars for its films, France 12 – the smart money to win Best International Feature Film would be on Drive My Car, speeding away with the top prize.