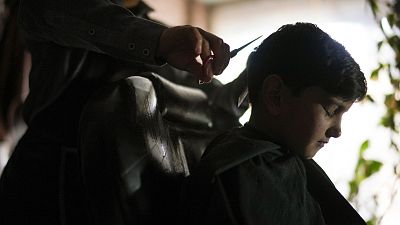 In the heavily patriarchal society of Afghanistan, there is one tradition which allows girls access to the male world: Bacha posh   -   Copyright  AP
By Theo Farrant  & AP  •  Updated: 18/01/2022

In a Kabul neighborhood, a group of boys kick a yellow ball around a dusty playground, their boisterous cries echoing off the surrounding apartment buildings.

Dressed in sweaters and jeans or the traditional Afghan male clothing of baggy pants and long shirt, none stand out as they jostle to score a goal.

But unbeknown to them, one is different from the others.

At not quite eight years old, Sanam is a 'bacha posh' – a girl living as a boy.

One day, the girl with rosy cheeks and an impish smile had her dark hair cut short, donned boy's clothes and took on a boy's name: Omid.

Now she can play football and cricket with the boys, says she easily beats the neighborhood butcher's son in wrestling, and can help her father at work.

What is 'bacha posh' and why do families choose to do it?

Bacha posh (meaning 'dressed up as a boy' in Persian) is a practice in Afghanistan and parts of Pakistan in which some families without sons will pick a daughter to live and behave as a boy.

The reasons parents might want to partake in the custom vary.

In Afghanistan's heavily patriarchal, male-dominated society, where women and girls are usually relegated to the home, 'bacha posh' is the one tradition allowing girls access to the freer male world.

Some families consider it a status symbol, and some believe it will bring good luck for the next child to be born a boy.

Under the practice, a girl dresses, behaves and is treated as a boy, with all the freedoms and obligations that entails.

She can play sports, attend a madrassa, or religious school, and, sometimes crucially for her family, work.

But there is a time limit: once the girl reaches puberty, she is expected to revert to her biological gender, a transition that's not always easy.

How is 'bacha posh' looked upon in Afghan society?

It is unclear how the practice is viewed by Afghanistan's new rulers, the Taliban, who seized power in mid-August and have made no public statements on the issue.

Their rule so far has been less draconian than the last time they were in power in the 1990s, but women's freedoms have still been severely curtailed.

Thousands of women have been barred from working, and girls beyond primary school age have not been able to return to the classroom in public schools.

With a crackdown on women's rights, the tradition could become even more attractive for some families.

For some families, the practice of 'bacha posh' is out of necessity.

With Afghanistan's economy collapsing, Sanam's father, already suffering from a back injury, lost his job as a plumber.

He turned to selling coronavirus masks on the streets, making the equivalent of €1-2 per day. But he needed a helper.

The family has four daughters and one son, but their 11-year-old boy doesn't have full use of his hands following an injury, so the parents said they decided to turn to Sanam.

"We had to do this because of poverty," says Sanam's mother, Fahima.

In their native Dari language, pronouns are not an issue since one pronoun is used for “he” and “she”.

"We don't have a son to work for us, and her father doesn't have anyone to help him. So I will consider her my son until she becomes a teenager."

Once she grows up, Sanam says she wants to be either a doctor, a commander or a soldier, or work with her father.

She is also aware that she will go back to being a girl.

The dark side of 'bacha posh'

For some, reverting back to their biological gender can be a traumatic experience.

"When I put on girls' clothes, I thought I was in prison," explains Najieh, who grew up as a 'bacha posh', although she would attend school as a girl.

One of seven sisters, her boy's name was Assadollah.

Now 34-years-old, married and with four children of her own, she weeps for the freedom of the male world she has lost.

If I were a man, I could have been a teacher in a school.

"In Afghanistan, boys are more valuable," she said. "There is no oppression for them, and no limits. But being a girl is different. She gets forced to get married at a young age."

Young women can't leave the house or allow strangers to see their face, Najieh said and after the Taliban takeover, she lost her job as a schoolteacher because she had been teaching boys.

"Being a man is better than being a woman. Despite having four children, I wish I could be a man. It is very hard for me. They banned me from teaching in school. If I were a man, I could have been a teacher in a school," she said, wiping tears from her eye.

"I wish I could be a man, not a woman. To stop this suffering."

**Watch the video above to dive into how 'bacha posh' affects families in Afghanistan. **

Weaving for popstars and popes: Meet the Venice velvet weavers