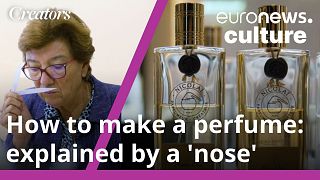 What does it take to be a ‘nose’: a creator of perfumes?

“You have to have a passion first, I think. You can't just rely on having a gift. Any gift has to be worked on and it can only be worked on if you have a passion because there’s an extremely tedious side to it," says de Nicolaï, explaining that sometimes hundreds of different tests are made for the same perfume.

Each one of de Nicolaï's perfumes contains between 18 and 35 different products. These raw materials are meticulously weighed, noted and assessed, then formulated into a multitude of combinations before a promising fragrance is found.

To avoid becoming too used to one individual scent, de Nicolaï works on multiple tests across several different fragrances each day.

"It's very long. Sometimes you can work for weeks on a perfume that won’t necessarily work out... there are no mathematical rules that support perfume creation. Unlike other fields, it's all very experimental and empirical.

"I couldn't launch something that I don't like. I think that the taste, my personal taste, give this olfactory signature to my brand. That's exactly what I've been trying to do since the beginning of this adventure which started over 32 years ago".

Patricia de Nicolaï was born into one of France’s oldest and best-known families of perfumers: the house of Guerlain.

Immersed in the world of fragrance from a very young age, she decided to study the profession - despite it being a sector largely dominated by men at the time. She thought one day she may go on to work at her family’s business:

“My uncle had come to me saying, ‘Go get trained, you'll come to Guerlain one day’. It never happened. In the 1980s, the Guerlain brand was still 100% run by the family and in particular by men, notably by my grandmother's brother, who would not have considered that a woman, or a woman from the family, could enter the business, something that had never happened before," says de Nicolaï.

“At the beginning of the 1980s, there were very few women perfumers. It quickly changed afterwards. But let's just say that I was a bit of a pioneer.”

In 1988 de Nicolaï became the first female winner of the International Prize for Young Perfumers (French Society of Perfumers) and she took the gamble of launching her own brand in 1989.

More than 30 years later, the brand is still going strong with stores around the world.

In 2008 de Nicolaï was awarded the 'Chevalier de la Légion d'Honneur', France's Legion of Honour, recognising her achievement as a perfume designer.

Enter the magical world of stop motion film with Patagraph