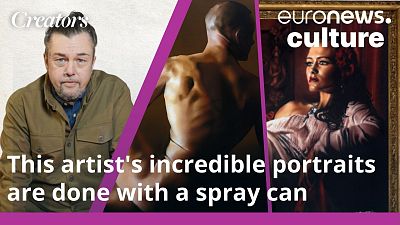 Artist Arron Bird, aka Temper, picked up a spray can for the first time aged 11. Back then his hands were so small he had to use two fingers to push the nozzle down but he immediately knew graffiti was going to change his life.

He wasn’t wrong. Temper’s incredible talent, in particular for realism, changed the public perception of graffiti and what was possible with an aerosol can.

The birth of an artist

Temper has been creative for as long as he can remember. He found an outlet for it on the streets and subways of Wolverhampton, UK, but says he was never interested in defacing public buildings.

“I used to go out and paint over obscene or fascist sort of statements ... I felt like I was cleaning up the environment, to be honest," says Temper.

"It was a bit different for the time because there was a lot of graffiti artists that were trying to disrupt and deface things… I wanted the art form to become something that was valid.”

His big break came in 2001 when he was commissioned by Coca-Cola to design a limited-edition Sprite can. After that, the successes kept on coming. The same year he was given a solo exhibition at the Birmingham Museum and Art Gallery, a first for a graffiti artist.

In 2008 his collection ‘Post Graphaelite’ sold at £1.4 million, a record for graffiti art in the UK. It was also exhibited at the royal Whitehall Palace, another first for a graffiti artist.

To date, all of Temper’s 28 collections have sold out.

However, it hasn’t always been plain sailing for the artist, who has suffered from serious mental health issues and has been in and out of hospital over the past 12 years.

“I'd been suffering with paranoid psychosis for many years and it was undiagnosed. So, yeah, there's been some really low points where life didn't seem right for me … Luckily for me, all of my friends, loved ones and supporters, they've never left my side. They're all my angels.”

In this episode of Creators, a series where we get inside some of the world's top creative minds, Arron Bird, aka Temper talks about success, pushing boundaries and mental health.

How to make a perfume: meet ‘nose’ Patricia de Nicolaï