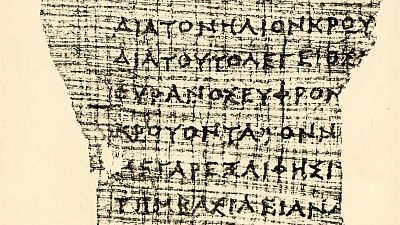 The papyrus is a key insight into ancient European philosophy and literature   -   Copyright  Orestis Kourakis/Archaeological Museum of Thessaloniki archive
By Tim Gallagher  •  Updated: 15/01/2022

On 15 January 1962 a group of workers constructing a road from Thessaloniki to Kavala in Northern Greece stumbled on several ancient tombs.

On entry they found that one contained the ashes of a funeral pyre which contained the burned remains of what would turn out to be the oldest book in Europe – the Derveni Papyrus.

The ancient scroll dates back to 340BC, making it the oldest literary Greek text in Europe. It may even be the oldest one ever found, and 60 years on it remains as mysterious and relevant as ever.

Researchers painstakingly reassembled the charred fragments to reveal 26 columns of incomplete text, which read as a philosophical commentary on an Orphic poem.

Followers of Orphism were associated with the mythical poet Orpheus and revered the gods Persephone and Dionysus who both went down to the Underworld and managed to return.

The poem concerns the birth of the gods, and the papyrus is an allegorical reading of the ancient Hellenic literature. It also contains instructions on religious rites.

The discovery has been billed as “the most important new piece of evidence about Greek philosophy and religion to come to light since the Renaissance,” and offers an insight into ancient philosophy before Socrates.

Although the origin and author of the text is unknown, the scroll still offers insights into Europe specific culture; it is unique in that it is one of the earliest European papyri, distinct from anything found in Egypt or the Middle East.

A UNESCO-listed 'memory of the world'

But where does it exist nowadays? At the Archaeological Museum of Thessaloniki, where it was comprehensively decoded in 2006.

Nine years later, in 2015, the Derveni Papyrus was placed on UNESCO’s 'Memory of the World' register in recognition of its proof of early dating of Orphic poems and distinctive perspective of pre-socratic philosophers.

UNESCO says that the first book of western philosophical traditions has, “global significance, since it reflects universal human values: the need to explain the world, the desire to belong to a human society with known rules and the agony to confront the end of life.”

Announcing the UNESCO status of the papyrus, the Director-General of UNESCO, Irina Bokova noted that the purpose of the Programme‎ exists to “preserve documentary heritage and memory for the benefit of present and future generations in the spirit of international cooperation and mutual understanding, building peace in the minds of women and men”.