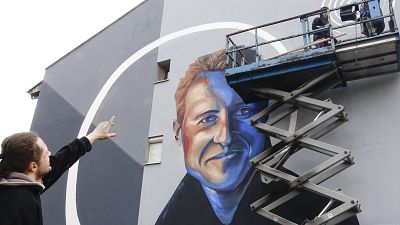 Former F1 driver Michael Schumacher has been honoured in a mural painting for his charitable work in Sarajevo , Bosnia and Herzegovina   -   Copyright  Eldar Emric/AP Photo
By Theo Farrant  & AP  •  Updated: 05/01/2022

Bosnian artists painted a gigantic mural of seven-time Formula 1 champion Michael Schumacher on a side of a building in Sarajevo, which was partially rebuilt by donations from the former motor racing star.

Both during the war and in postwar times in the 1990s, Schumacher came to Sarajevo on a few occasions to show his support to the people of the besieged city.

Schumacher sponsored several children's hospitals in Sarajevo and helped rebuild some of the destroyed homes in the city.

The 3rd January 2022 marked Schumacher's 53rd birthday and artists in Sarajevo paid homage to the legendary Formula 1 driver, for his charity work in Bosnia and Herzegovina.

Schumacher was initially in a medically-induced coma after he was injured in a skiing accident in Switzerland. That was in 2013, and since then details on his recovery have been thin on the ground, largely being kept as private family information.

Bosnian painter Benjamin Cengic, who came up with the mural concept, said the city of Sarajevo needs to return the favour to Schumacher and show support to his family during this difficult time.

Artists used a brand new painting technology while making this mural - an air-purifying paint which cleans the air from pollution as it is applied.

Check out the video to see how the mural was painted.