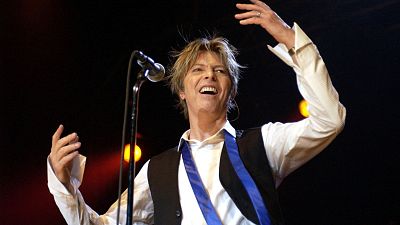 This is the story of an "ghost album" album like no other.

'TOY' – a body of work intended to be David Bowie's 23rd release – will be unearthed in its entirety this Friday (26 November) after it was sidelined 20 years ago in a label dispute.

Recorded after his world-famous Glastonbury set in 2000, it contains reimaginings of songs the singer first recorded in the 1960s-70s.

The album is not known to the general public. Fans of the Thin White Duke that followed his footsteps with a magnifying glass were able to leak a pirate version on the internet in 2011.

Others were destined for B-sides and compilations. Bowie went on to release 'Heathen' the following year instead.

A standalone physical vinyl and CD release of the album will arrive early 2022, on January 7 – the day before the artist was due to turn 75.

Hearing 'TOY' as Bowie would have wanted

This unique release will be the first time fans get to hear the album as the artist intended.

Representatives of the artist today suggest that he was ahead of his time in wanting to drop a "surprise album" before the idea achieved mainstream success.

Bowie insisted on an instant release or nothing at all, though that didn't stop certain tracks from reaching the internet in later years.

"The fans still know two-thirds of the album," says Jérôme Soligny, author of 'David Bowie: Rainbow Man', a key reference work for any devotee of the artist.

'TOY' allowed Bowie to give "a facelift", as Soligny puts it, to little-known songs from his early repertoire– only three original 60s/70s versions exist in the initial batch appearing on this new album.

Bowie's co-producer Mark Plati says the album captured the singer at one of his happiest times, "an amber of joy, fire and energy."

"It’s the sound of people happy to be playing music. David revisited and re-examined his work from decades prior through prisms of experience and fresh perspective - a parallel not lost on me as I now revisit it twenty years later.

"From time to time, he used to say ‘Mark, this is our album’ - I think because he knew I was so deeply in the trenches with him on that journey. I’m happy to finally be able to say it now belongs to all of us”.

What can fans expect from 'TOY'?

The seeds of Bowie's love for reinterpretations can be found at the end of the 1990s, when he performed 'Can't Help Thinking About Me' – the first song he ever recorded under the 'Bowie' moniker – on stage with the same group of musicians he'd go on to make 'TOY' with.

'TOY' is an honest album, a "missing link", according to Soligny, that makes the tonal leap between 'Hours' and 'Heathen' make more sense.

He says Bowie sings like "Scott Walker (a British avant-garde legend) whom he adored. He goes towards a baritone voice."

Questions have been raised about the album's cover, a puzzling image depicting the features of an adult Bowie on a face of a simian child.

The animalistic imagery doesn't surprise Soligny that much. After all, the singer did appear as half-man, half-dog on 'Diamond Dogs' in 1974.

The recording led to an important personal reconciliation

This period is also notable in Bowie's musical history because it led to a reconciliation with longtime producer Tony Visconti.

The pair had fallen out in 1983 as a result of Bowie opting for Nile Rogers to produce 'Let's Dance', instead of Visconti, with whom he'd worked with for the past four albums.

'Let's Dance' went on to become one of Bowie's most commercially successful works.

Visconti wasn't responsible for any of the material that came from the 'TOY' 17 years later, but he was present in New York at the time of its recording.

He later revealed that Bowie was "hurt terribly" by the label's refusal to surprise release this body of work. As a result, Bowie left Virgin/EMI in exchange for a deal with Columbia Records.

"Virgin has become absolute shit. These people were terrible in the two years before I left," Bowie said in 2002 in comments reported in 'Rainbow Man'.

Visconti went on to assume his role as producer until 2016's 'Blackstar', the 26th and final Bowie album released two days before he died of liver cancer at the age of 69.