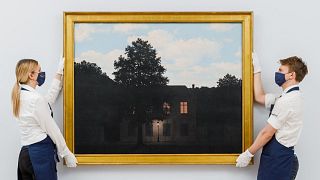 The work is being presented at Sotheby's galleries around Europe ahead of its monumental sale   -   Copyright  Sotheby's
By Shannon McDonagh  •  Updated: 13/01/2022

Best known for his surrealist image of a bowler-hatted man, the works of Belgian painter René Magritte are often shrouded in mystery, shifts in reality, and unpicking the ordinary.

Now, the late artist's 'L'empire des lumières' is set to auction for over €52 million when it takes to the podium at Sotheby's.

The cinematic painting – described by the auction house as a "masterpiece of 20th-century art" – was created in 1961 for Baroness Anne-Marie Gillion Crowet, a lifelong friend of Magritte who some believed to be his muse.

'L'empire des lumières' remained in Baroness Crowet's family – until March 2, when it ends up in the collection of one wealthy individual.

The final fulfilment of Magritte's vision

The most expensive painting of Magritte's to-date is 'The Pleasure Principle', also sold at Sotheby's in November 2018 for over €23 million.

If Sotheby's estimations are correct, this work could exceed the artist's auction record twofold.

People are drawn to 'L'empire des lumières' for its textured history.

Several versions of the work were created before this final piece – 17, to be exact. But this particular work is considered the final fulfilment of Magritte's vision. Older versions can be found stored all over the world.

However, this painting spent time loaned to Musée Magritte in Brussels from 2009-2020, as well as adorning galleries in Paris, Seoul, Milan, and more.

People can visit it as it tours Los Angeles, New York, Hong Kong, and London before landing in fresh hands.

Spectators can visit the paintings at the Sotheby's gallery in each city on the following dates: