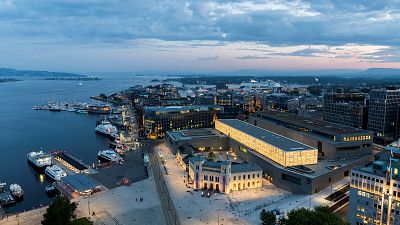 While its institutions and employees have hardly been alone in suffering from the impact of COVID-19, the international museum sector has had a hard time of it over the last two years, with almost all the world’s major museums shut down during lengthy lockdowns.

Surveying the damage, The Art Newspaper calculated a global drop of 77% at the top 100 art museums in 2020.

Europe fared particularly badly, assaulted as it was (and still is) by some of the worst outbreaks of the pandemic. The world’s most visited museum, the Louvre in Paris, saw its attendance drop from around 9.6 million visitors in 2019 to 2.7 million in 2020; visitors to the Prado in Madrid dropped over the same period from 3.5 million to only 852,000; while London’s British Museum, National Gallery and Tate Modern all saw drops from over 6 million visitors to less than 1.5 million each.

Despite the gloom and lost income, however, the sector hasn’t stood still. Museums, in general, have been able to celebrate their reopening from virus-enforced hibernation, but they have also been joined by others emerging, chrysalis-like, from longer periods of closure, renovation and reinvention.

Significant arrivals and reopenings in 2021 have included the Humboldt Forum in Berlin, The Courtauld Gallery in London, and Rotterdam’s Depot Boijmans Van Beuningen. In Budapest, meanwhile, the House of Hungarian Music, a concert and exhibition centre housed under a striking roof structure, is set for completion before the end of the year.

Part of the Liget Project - a vast museum building scheme billed as Europe’s largest urban cultural development - the music centre is set to be joined by Budapest’s new Museum of Ethnography opening in the same park next year, followed in the future by a New National Gallery designed by the Japanese architecture practice, SANAA.

With notable openings set to continue across Europe in 2022, here we look at two key developments that will shift attention to the north, marking as they do significant milestones for the art scenes of Norway and Scotland.

The new National Museum in Oslo

Having already seen the arrival of Oslo's new, 13-storey MUNCH museum in October this year, the European art world will be focused again on the Norwegian capital in the summer of 2022, with the June reopening of Norway’s National Museum of Art, Architecture and Design.

Built using materials including oak, bronze and marble, and designed by German architects Kleihues + Schuwerk, the landmark new building will display more than 5000 pieces from a collection that totals almost 400,000 objects.

Covering everything from medieval tapestries to modern design and contemporary art, the big draw will no doubt be the earliest painted version of Edvard Munch’s ‘The Scream’. With later versions of that seminal piece also on display at the dedicated MUNCH museum, fans of the artist will be spoilt for choice in the city.

More broadly, though, the opening of the new National Museum will confirm Oslo’s elevation as a destination for art, giving it the largest museum in the Nordic region, blessed with 13,000 m2 of exhibition space.

Explaining the significance, the National Museum’s Director of Communications Eirik Kydland tells Euronews: “The opening of a museum like this is a once in a lifetime experience, and a huge event in Norway. It is the first time we will have a comprehensive presentation of art, architecture, design and crafts under the same roof, and the very first time we have a permanent exhibition of contemporary art.”

Noting that the cost of building work has amounted to just over 600 million euro, Kydland says that the project will complete the recent cultural transformation of Oslo, with the city "now home to a thriving art scene with galleries and artist-run initiatives as well as world-class museums like the Munch Museum and the National Museum.”

The first show planned for the National Museum’s dramatic rooftop temporary exhibition space, known as the Light Hall, will be a large showcase of Norwegian contemporary art, with work by 147 artists and collectives.

Before Oslo’s big moment under the summer sun, one of Scotland’s most important repositories of fine art and antiques, The Burrell Collection in Glasgow, will have its own grand reopening in March 2022.

Home to a collection assembled by the Glaswegian shipping magnate Sir William Burrell (1861-1958), the rejuvenated museum will offer a 35% increase in exhibition space, a new entrance and enhanced outdoor spaces.

Given pride of place within the new displays will be collection highlights including Chinese pottery and porcelain produced over 5000 years, a significant trove of medieval artwork and arms, and paintings by artists including Manet, Cézanne and Degas.

Also on permanent display will be the rarely exhibited Wagner Garden carpet - a woven, 17th-century textile over 5 metres in length, considered to be one of the three oldest surviving Persian garden carpets in the world.

the most significant cultural event in Scotland, if not the UK, in 2022

Dr Bridget McConnell on the reopening of Glasgow's Burrell Collection

One of a group of museums now managed by the charity Glasgow Life, which runs cultural institutions and other venues and services on behalf of Glasgow City Council, The Burrell Collection has been closely associated with Glasgow’s cultural regeneration since it first opened in 1983. Its backers now hope the museum’s reopening will have a similar impact.

Dr Bridget McConnell, Chief Executive of Glasgow Life, tells Euronews that this “will be the most significant cultural event in Scotland, if not the UK, in 2022…. Just as the [original] opening of The Burrell Collection signalled Glasgow’s ambition to use its cultural heritage to become a must-visit destination, the reopening in 2022 will continue to develop the city’s appeal as a place to visit, live and work in.”

McConnell adds that the new layout will take “visitors on a tour of 6,000 years of history through the rare and remarkable treasures… using innovative interpretation and displays.” All three floors of the building will be open to the public for the first time, including storerooms on the lower ground floor.

Acknowledging that the COVID-19 pandemic “has caused significant and unexpected issues” for the renovation project, McConnell says that a collective team effort following a six week shutdown, as well as the provision of extra funding, means they are “firmly on track for reopening in March 2022.”

Those in charge of museums across Europe will no doubt be united with McConnell in hoping that the worst effects of the pandemic are now behind them and that they can now focus on giving their visitors inspiring and thought-provoking experiences.