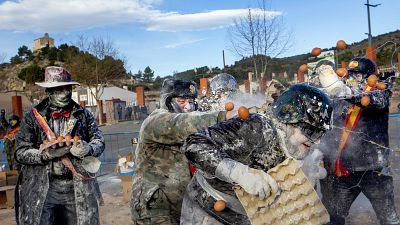 The small toy-making town is famous for its centuries-old 'Els Enfarinats' celebration.

Revellers dress in military-style costumes to stage a mock 'coup' and take over power in the town until sunset.

The fiesta - which coincides with the 'Day of the Innocents', Spain's equivalent of April Fools' Day - is believed to be over 200 years old.

Each year, the council is removed in a 'coup' perpetrated by Enfarinats armed with eggs, flour, and fireworks to battle with the "opposition".

But this year - in a seemingly doomed-to-fail attempt at some order - the flour finale was held in a large square on the outskirts of town.

Members of the public were not allowed near the cordoned-off area.

Plastered in flour, the 'New Mayor' of the coup plotters said he was happy that the fiesta was back as "these traditions cannot be lost".

A local onlooker said that despite the COVID restrictions, she was enjoying herself and pleased the event was back on.

But think of all the pancakes they could have had...

Check out the video above to see how the battle went down.