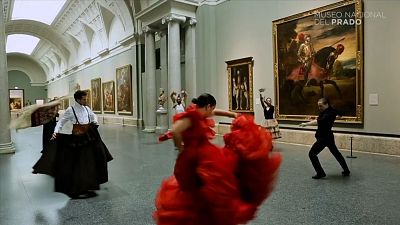 Dancers in Spain on Tuesday celebrated International Flamenco Day, with both fine art institutions and local clubs joining in.

Intentional Flamenco Day takes place every year on November 16 to commemorate the day UNESCO included the art form in its list of intangible cultural heritage.

This year, events took place in both the El Prado Museum and in flamenco clubs like the 'Corral de la Moreira' in Madrid, Spain.

What is Flamenco dancing?

The term ‘flamenco’ is used to describe a combination of both modern and traditional musical styles typical of southern Spain. The art form combines singing, dance and musical accompaniment (called cante, baile and toque).

Formed in the southern Andulsian region of Spain, flamenco is an intrinsically Spanish art form, although its roots lie in the complex multi-cultural and ethnic society of the south of Spain from the 16th and 17th centuries.

'It is a feeling, an international language: pain, happiness'

At the 'Corral,' flamenco dancer Belen Lopez was centre of attention during a specially prepared performance.’

"It is a feeling, an international language: pain, happiness. It is something that hasn't words but anyone in the world can understand if they let themselves be enveloped in the moment," said Lopez in an attempt to describe the dance.

The president of flamenco clubs Juanma del Rey said flamenco is an artistic form that characterises Spain, but is also ‘universal’ and something that is sung and danced around the world.

Like many cultural events, flamenco performances and artists were badly hit by the COVID pandemic.

Some bars and clubs did have to close their doors forever over the shutdown: However, the remaining bars and clubs are now opening up for public performances.

Check out the video above to see some flamenco in action.

Madrid monk's unfinished 'scrap cathedral' lives on after his death