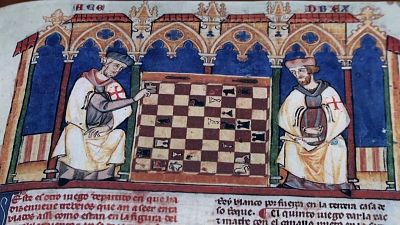 Medieval music, drawings, stories and poems feature in seven 13th-century codices that star in a new exhibition in a Renaissance monastery.

The exhibition 'Codices of the Wise King' at the Royal Library of the Monastery of El Escorial, contains texts and illustrations about the Virgin Mary, the medical properties of stones, the history of Spain and the rules of chess, dice and table games.

The manuscripts were created under the orders of King Alfonso X and became part of the Monastery's collection between 1573 and 1591.

Who was Alfonso X and why was he nicknamed 'The Wise'?

He was also known as "El sabio" or "The Wise" because of the literary, historical, legal and scientific work he developed under his reign.

"The name of "the Wise" ("El Sabio") was given by his grandson Alfonso XI taking to reflect his legacy and scholarship of astrology, jurisprudence, history, poetry, games and science. Obviously, he is an innovative king, he is a wise king," says Del Valle.

Alfonso X was born in 1221 in Toledo in an era and city where Christians, Jews, and Muslims used to live together.

The king consolidated Spanish as the vernacular language of the kingdom, and he focused mainly on translating astronomical, medical and scientific documents.

What is on display at 'Codices of the Wise King'?

"At the moment, in the library, we have seven codices belonging to the time of the King (Alfonso X) that he ordered, that he promoted, and that he probably even had in his hands. Therefore, there are seven codices from the 13th century but they do not include all the fields that interested him, because, for example, astrology is one of his first most passionate vocations," says Jose Luis Del Valle, the director de Royal Library of the Monastery of El Escorial.

These works gather the ancient knowledge of different cultures which visited the Iberian Peninsula: from texts by Aristotle and Ptolemy to Latin, Arabic and Hebrew works, and contemporary contributions developed both in the Latin West and the Islamic world.

The seven codices are the "Codex Rico," the "Codex of the musicians," two "Cantigas de Santa María," the two codices of "Estoria de España" (history of Spain), the "Lapidary," the "Book of forms and images," and the "Book of chess, dice and table games."

One of the highlights is the "Cantigas de Santa María," which are a European repertoire of lyrics and medieval folklore.

It's a collection of 400 poems written in Galician-Portuguese, accompanied by musical annotations and illustrations.

"No other collection of music as important"

The "Cantigas" or songs talk about miracles said to be performed by the Virgin Mary for people who asked for her help.

Experts underline the great value of these images to understand the musical instruments of the era, but also to the daily preoccupations of the 13th century: buildings, clothing, armies, people ploughing fields and boats.

There are codices dedicated to music, the history of Spain, but there is even a codex with instructions for playing chess and dice.

"We are able to see many characters in the chess book (Codex de ajedrez) and therefore we are going to have a lot of knowledge about that time thanks to these characters: their clothes, the architectures that are represented. In the game of dice, another type of character appears. It is a game of chance and therefore the intellect that appears in the game of chess here is lost," says Del Valle.