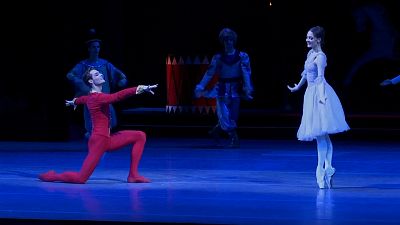 It is traditionally performed during the Christmas season and this year was no exception despite the coronavirus pandemic.

Before entering the theatre, all those who attended the venue were required to present a vaccination certificate or submit a PCR negative test result.

The theatre limited its audience capacity to 70 per cent. The tickets start from 66 euros and they are thin on the ground.

Tchaikovsky's sparkling, effervescent score contains a wealth of famous melodies, and the production is a visual delight from start to finish.

Fellow theatregoer Maxim Agafonov added: "I think this performance is for both kids and adults because everyone dreams of getting into the fairy tale where good defeats evil."

A production 140 years in the making

The timeless story of Clara, who is whisked away on a fairy tale adventure by her Prince debuted in Russia in 1892 in Saint-Petersburg and 70 years later was performed at the Bolshoi for the first time.

The ballet's plot was adapted from E. T. A. Hoffmann's 1816 short story "The Nutcracker and the Mouse King".

Truffle hunting gets the UNESCO treatment after centuries of know-how