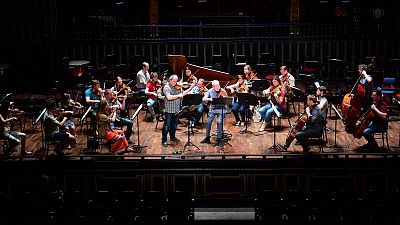 Musicians in the concert hall of Liszt Academy in Budapest on May 19, 2017 during their rehearsal for an evening concert with Hungarian 'Concerto Budapest' symphony orchestra.   -   Copyright  AP Photo
By Euronews  •  Updated: 24/12/2021

The famous TV channel will diffuse repeated screenings of the classical concert inspired by Hungarian folk and gypsy music, filmed through the lenses of 40 cameras set up at the Italian Institute last summer.

The Concerto Budapest Symphony Orchestra, conducted by András Keller, performed a fusion of classical symphonic and world music, with the result expected to be the highlight of the festive schedule.

"I sent them a very wild mixture of folk, jazz, and classical music. And I was very surprised when the TV channel wrote back two days later to say that they wanted it," film director Imre Szabó Stein told Euronews.

In a programme of 12 works, Hungarian, Romanian, Spanish, and gypsy music meet jazz and rock'n'roll, all while remaining in the same concert hall.

Stein even managed to evoke the smoky Budapest cafes of the 1960s through the use of black and white images.

"It's an uncontrollable expression of Carpathian joy, which is different from Balkan joy, different from Nordic joy. It's a very special film exploring our deep musical traditions," he explained.

This is not the first time the Hungarian director has worked with the Concerto Budapest Symphony Orchestra.

In 2020, 'Weinberg', a two-hour film with the Concerto Budapest Symphony Orchestra and Kremerata Baltica, led by András Keller and Gidon Kremer and directed by Imre Szabó Stein, won a coveted Golden Lion for Best Performing Arts Film at the International Venice TV Festival.

You can watch it here until 28 December.