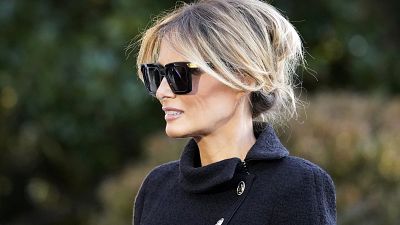 Former model and history’s most aloof First Lady, Melania Trump, is the latest public figure to take a step into the NFT market.

The wife of ousted President Donald Trump has launched a venture which will see her release NFTs "in regular intervals" on her website.

Buyers will be offered the chance to own a digital watercolour painting of Melania’s eyes by artist Marc-Antoine Coulon in exchange for a Solan token, a bitcoin worth around $180 (€160).

NFTs, or non-fungible tokens, are essentially digital certificates of authenticity that can be attached to art, music or any other type of digital file. NFTs confirm an item's ownership by recording the details on a digital ledger known as a blockchain, which is public and stored on computers across the internet, making it effectively impossible to lose or destroy.

What’s the big deal with NFTs?

The venture is the latest in a number of high-profile entries into the field of NFTs, as the formerly-niche tech phenomenon has proliferated across a variety of sectors.

Earlier this year history was made when digital artist Beeple sold his work “EVERYDAYS: THE FIRST 5000 DAYS”, at Christies for $69 million (€61 million).

Meanwhile celebrities including Grimes, Star-Trek actor William Shatner and NBA star LeBron James all being linked to – and profited from – the digital phenomenon.

Elsewhere, director Quentin Tarantino is currently in a legal dispute with Miramax over his plan to make NFTs related to the cult film, 'Pulp Fiction'.

The unique tokens have also found their way into other industries including wine and gambling.

The announcement of Ms Trump’s plans included the detail that a portion of the proceeds would go to charities supporting foster children.

However, Aaron Dorfman, president and CEO of the National Committee for Responsive Philanthropy, noted that when a company says "a portion of the proceeds" will go to charity without indicating specifically what amount, "It's a huge red flag."

"It means that charity is not a serious part of their plan," Dorfman said. "It's a marketing ploy."

The Trump family has a troubled history with charities, though Melania Trump was not directly involved in a clash over a charity the family ran in New York.

While still president, Donald Trump paid a $2 million (€1.7 million) court-ordered fine after conceding he used his charitable foundation as a personal piggy bank. The fine was ordered to be distributed amongst eight charities and the Trump Foundation was dissolved.

In addition, Trump agreed to restrictions if he were to form a new charity or foundation and New York State required mandatory training for his children, Donald Trump Jr., Ivanka Trump, and Eric Trump, who were all involved with the Trump Foundation.

Giving ancient varieties a new twist: meet the next generation of Bulgarian winemakers