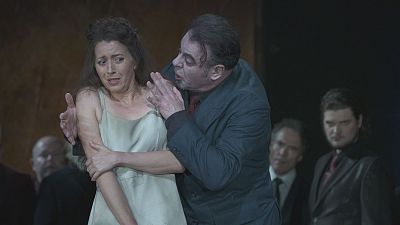 A powerful new version of Verdi's masterpiece Rigoletto has opened the Royal Opera House's season, under the baton of Sir Antonio Pappano.

Music director at London's RoH and conductor of Rigoletto, Pappano says Verdi's skill at creating contrasts, the play of light and dark, comedy and tragedy, is one of the reasons it is so iconic. Verdi himself once described Rigoletto as his 'best opera'.

Rigoletto is Director of Opera Oliver Mears' directorial debut. He says he always begins a new production by looking at the composer's life and why he wrote it at the time he did.

"Verdi was still mourning the death of his wife and his two young children in 1850 when he wrote the opera. He was also very, very bitter about the failure of the 1848 revolution. So this is an opera informed not only by personal tragedy but also by a real political slant.

'That's a big mistake, why did she make that choice?'

Cuban-American soprano Lisette Oropesa plays Gilda, the daughter of the court jester Rigoletto. the character sacrifices herself for her lover but Oropesa says while she is tragic she is not a victim: "She makes a very conscious decision about what she wants to do. To many people looking at it and watching the show will go 'wow, that's big mistake, why did she make that choice?'

"But she doesn't make that choice as a 40-year-old woman, she makes that choice as a 17 or 16-year-old girl. There are certainly lives that we all know and recognise that were cut short because of recklessness, reckless behaviour. How many young musicians, famous musicians that we might have loved and idolised overdosed and then died suddenly because of some reckless choice they made?"

'An earworm of the first order'

"Though this aria sounds completely inevitable, if you see an early sketch of it it was somewhat different and - like Beethoven before him - Verdi had to refine it to get to the point where it sounds completely natural.

"It could be a folk song and you can imagine when that went into the ear - it was an earworm of the first order and you had carriage drivers and everybody in town whistling it - rightfully so."

It was almost exactly 18 months ago that the Royal Opera House closed, Rigoletto marks a return to normality, as Lisette Oropesa explains: "It’s really nice to have an audience to sing to but not only to sing to but to breathe with, to experience the exchange that only happens during live theatre."