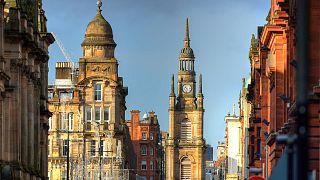 On October 27, Glasgow City Council unanimously backed a motion stating that women should be at the heart of all aspect of city planning, becoming the first city in the UK to embrace 'feminist urbanism'.

Feminist urbanism advocates for a type of urban planning that promotes inclusivity and puts the needs of women, non-binary and genderfluid people at the forefront of the way we think of the urban landscape. Because, perhaps unsurprisingly, our cities are far from being gender-neutral.

Scholars of feminist urbanism argue that men have historically been in charge of designing the cities we live in, and they did so thinking of their own needs and habits, often overlooking or sidelining issues of safety and accessibility affecting women and sexual and gender minorities.

The cities we inhabit and the spaces within them are experienced in different ways by all of us, with factors like gender identity, background, ethnicity and age playing an important role in the way we move across the urban landscape. A straight white man, a gay Black teen, or a middle-class 80-year-old woman with a disability will all experience the city in different ways.

But our cities weren't built thinking of each and everyone's specific needs. For a long time, gender-neutral defaulted to male.

"[Glasgow] Council notes a gender-neutral approach to city development does not work, that women and people of marginalised genders have diverse needs that are not currently reflected in practice and that an intersectional, inclusive and climate-friendly approach is needed," said Glasgow Green councillor Holly Bruce, who pushed forward the groundbreaking motion in the Scottish city.

"Council agrees that in order to create public spaces that are safe and inclusive for women, and accessible for all members of the community, it is fundamental that women are central to all aspects of planning, public realm design, policy development and budgets," she added.

A feminist city is one where the needs of all people living in it are met - not only those of white, cis, able-bodied men. In concrete terms, that means building a city where everyone, including but not limited to women, feels equally safe and empowered, and where every group has the same access to services.

According to Holly's motion, the main features of a gender-equal city include walkability, proximity to services, safe public spaces and open green spaces.

"These factors aren't only important for women, they are key considerations for creating a healthier, more liveable city for all, with positive impacts in terms of physical and mental wellbeing and air quality," Bruce said.

Glasgow Council found that by opening up more spaces to women, those will also have access to more opportunities, leading to increase participation in political meetings "and ultimately women's elected representation".

How will Glasgow change?

"To be honest, I don't know yet because the whole point is doing this approach is consulting with women and asking them what they want," Bruce told Euronews Culture.

The Glasgow Council has decided to consult the public before moving forward with any change, asking citizens what measures they’d like to see implemented in their cities.

"I can say that I would really like wider pavements and more street lights, but I'm a white, cis, able-bodied woman, so I don't know what everyone needs," Bruce said.

"Young women said that they want more lighting in certain parts of parks so that they can travel through that at night and they can also just spend time there because it's a free, lovely space to be in. Of course, we have to be very careful, and, as a Green, I really want to make sure that we're not disturbing all the biodiversity in our parks."

A report published in late 2021 by Young Women Lead (a group established by YMCA Scotland) after the kidnapping and murder of Sarah Everard in London found that a majority of women and non-binary people in Glasgow felt unsafe or uncomfortable on buses and bus stops, while only 5 in 214 respondents felt safe while at the park.

Introducing more public toilets is another element the Scottish city is going to look into, said Bruce, as the pandemic revealed a lack of public toilets disproportionately impacting women.

Councillor Bruce said she will also follow the lead of cities which have already been making changes around feminist city planning.

Vienna, for example, has introduced wider pavements which allow parents with prams (as well as wheelchair users) to walk through the city without getting constantly stuck behind other pedestrians, as well as making changes to its transportation system and even the language used to communicate with the public.

Other projects to make cities in Europe more gender-inclusive are ongoing in Barcelona, Spain, and Umeå, Sweden.

Scotland is shaping up to be a beacon of feminism in Europe, after passing legislation this summer which made period products absolutely free for everyone.