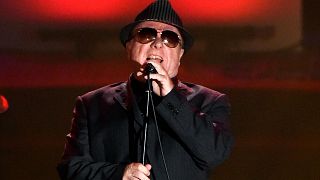 Northern Ireland’s health minister is suing Van Morrison after the singer called him “very dangerous” for his handling of coronavirus restrictions.

Robin Swann is taking the singer to court in a legal after he lead a number of chants during concerts against Swann, repeatedly implying that the minister was a threat to the public.

The Belfast-born singer has consistently opposed restrictions to curb the spread of the virus and spent much of 2020 releasing anti-lockdown songs.

'No More Lockdown,' 'Born to Be Free' and 'As I Walked Out' failed to chart in his home country.

'Some of what he is saying is actually dangerous'

Swann first published an opinion piece in Rolling Stone magazine in September 2020 calling for the singer to use his status to spread awareness about the challenges of COVID-19, rather than "encourage people to not to take Coronavirus seriously."

"We in Northern Ireland are very proud of the fact that one of the greatest music legends of the past 50 years comes from our part of the world. So there’s a real feeling of disappointment - we expected better from him."

The Stormont politician goes on to describe Van's campaigning as a "smear on all those involved in the public health response to a virus that has taken lives on a massive scale."

“Some of what is he saying is actually dangerous."

Over 283,000 people in Northern Ireland have tested positive for the virus since it reached the UK in February last year.

The singer will contest the claim

Van Morrison, real name Sir George Ivan Morrison, previously engaged in a fair share of his own litigation with an attempted challenge against the closure of live music in his home country.

The case was dropped in August.

Swann’s lawyer, Paul Tweed, said proceedings “are at an advanced stage with an anticipated hearing date early in 2022.” The lawsuit was first reported in the Sunday Life newspaper.

Morrison’s lawyer, Joe Rice, said the singer would contest the claim. He said Morrison will argue “that the words used by him related to a matter of public interest and constituted fair comment.”