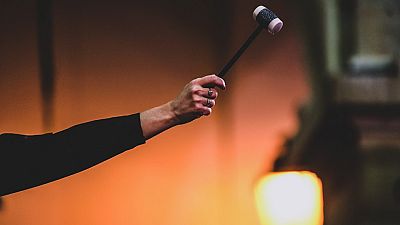 The 161st auction of the Hospices de Beaune, supervised by French actors Pio Marmaï and Jeanne Balibar, will remain engraved in the annals due to a top sale of €800,000 for a barrel of Corton-Renardes Grand Cru. This is the most a barrel has ever fetched in the long history of the auction.

Over 300 bottles of red and white wines were also sold to the highest bidders following this year's modest harvest.

The proceeds from the terroir-shattering auction will go to the French NGO 'Solidarité Femmes' and The Institut Curie, France's leading institution in the fight against cancer.

"In a few weeks, we will have a new machine for mammograms. This will help in the fight against breast cancer that we are also highlighting with the Curie Institute. For the next 7-8 years, since it takes a long time to complete a hospital project, we will rebuild the entire accommodation area. This is a very large investment of €70 million, to which not only this sale but also the following ones will contribute to," noted François Poher, director of the Hospices Civils de Beaune.

Dozens of restaurateurs from all over France and Switzerland attended the auction. They say they bid not only for the wine but also for the good cause.

"Since 2013, I have been buying barrels. It's because of the wine but also because of the good cause," said Hans Berchtold, a restaurateur from Bâle, in Switzerland, who has been coming to Beaune to attend the auction for the past 50 years.

"This year, I am not going to bid for myself, we are going to give the order to the Louis Jadot house who always did the maturing of our wines because there is only 60% of quantity and the prices are going to go up. I will share one or two barrels with three or four friends," he went on.