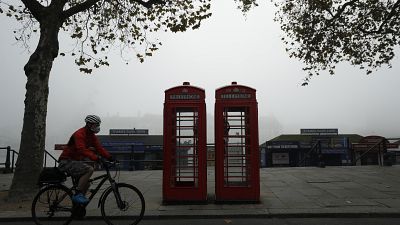 They have become tiny museums. They're iconic emblems of Britain, and although many of them no longer work, they attract millions of tourists every year.

We're talking of course about the red telephone box.

No episode of Inspector Morse would be complete without one and they are as synonymous with British identity as the Tower of London or the Queen’s side profile. But in an age where the average person spends up to 6.4 hours on their smartphone, do we need them?

The answer from the UK’s communications regulator Ofcom is a resounding yes.

Ofcom announced this week that they were proposing rules to prevent 5,000 phone boxes in low service areas from being removed, including ones in areas with high rates of accidents and suicides. Between 2019 and 2020, 150,000 calls were made to emergency services using the booths, with a further 45,000 made to other helplines like the suicide hotline, Samaritans.

There are currently around 21,000 phone boxes in the UK, down from 92,000 at the height of the network. Given that these days most are the glass and aluminium models, why does the red phone box stick in the public imagination so?

The story of the red phone box - and its demise - is woven into British history. So join us as we dial the number of a national icon.

The original phone boxes were spread between a number of private companies before being brought under the umbrella of the General Post Office (GPO).

After being transformed into a government department in 1912 (and a slight delay caused by World War One) the GPO introduced the original standardised phone booth - Kiosk 1 - in 1921.

Mostly white with a red door and ‘always open’ sign, Kiosk 1’s design proved outmoded and unpopular, so much so that in 1923 a competition was launched to redesign the booth by the Metropolitan Borough Joint Standards Committee.

However, GPO had their own ideas as did Birmingham Civic Society and the decision eventually fell to the recently formed Royal Fine Art Commission who were responsible for issues of ‘public amenity and artistic importance’.

Three leading architects were invited to submit designs for Kiosk 2 (K2) with the condition that they were made of cast iron and cost under £40 to produce.

Sir Giles Gilbert Scott was the winner and soon 1,700 of Britain’s first red phone boxes were installed, mostly in the nation’s capital.

K3 came along in 1928. Manufactured from concrete, cream-coloured and intended for nationwide distribution, 12,000 were installed across the country by 1935.

The oversized K4 saw the addition of a stamp machine and post box and was so big it was only ever introduced in limited numbers, while the rare and unsuccessful K5 was also not widely put into use.

According to seminal niche website 'The Telephone Box', the K6 was designed for King George V’s Silver Jubilee in 1935 and 60,000 of these booths were installed across Britain. The red, rectangular box with a domed roof is the same kiosk that lines souvenir shop shelves today.

With the Festival of Britain in 1953 demand for a kiosk design that reflected the country’s post-war identity grew. After a call for submissions the experimental K7 - which featured glass panels and an aluminium frame - was made. Only a small number were ever installed however, and as with the following K8 it never replaced the prolific and popular K6.

The GPO became the Post Office in 1969 and split into the Post Office and British Telecoms (BT) in 1981. Shortly after this BT was sold off in the wave of privatisations that took place in the 1980s.

In 1985 a modernisation scheme was announced which saw the removal of large numbers of the traditional GPO kiosks. In response to some public alarm, protected status was offered to the GPO booths, and in 1986 the K3 outside London Zoo’s parrot house became the first protected GPO kiosk.

2000 kiosks were initially given grade two listed status meaning they are of “nationally important and special interest”, with some of the celebrated K6 models being reinstated.

Although phone box calls are down, since 2011 1,500 communities have participated in an ‘adopt a kiosk’ scheme. This means you’re likely to see them acting as a library, mini-art gallery or housing a defibrillator.

So next time you see a kiosk key ring, consider that at one time thousands of red phone boxes had queues of British people lining up outside them, waiting to make a call.

Pope to open new diversity art space in the Vatican