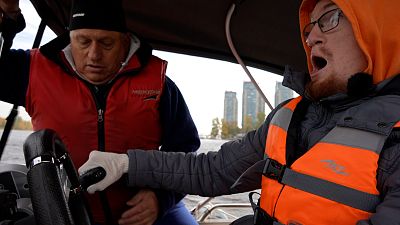 Ivan Bakaidov was 15 years old when he first met Lina at school. She had a form of cerebral palsy that limited her movements and speech. Living with cerebral palsy from birth, he shared similar speech difficulties, so the Russian native decided to develop a virtual keyboard to help her communicate.

Ivan was inspired by Stephen Hawking’s voice device after his grandmother read him the English physicist's biography. “Back then this programme wasn’t ​​in the public domain and it wasn’t available in Russian. So, I created a similar programme for Lina in Russian,” he explained.

While developing the interface for Lina, Ivan became aware of how the device could change people’s lives, including his own. “I realised that my life would be much easier if my computer would be able to talk for me,” the 23-year-old explained. “Many times, I found myself in a situation when I couldn’t speak up for myself and this put me in a position when people didn’t talk directly to me, they talked about me, right in front of me. This is a terrible position to be in,” Ivan added.

In 2017, Lina passed away and Ivan named his company, LINKa, after her. “LINKa is a play on words. First, Linka is a friendly way to say the name Lina and Linka is also like a link, a connection,” he said.

Ivan has since gone on to develop speech synthesiser software for people with musculoskeletal disorders. The applications are provided free of charge and can be used by people with various disabilities, including cerebral palsy, autism and those recovering from a stroke.

Tatyana Novikova’s daughter, Lera is 8 years old and has cerebral palsy. Through Ivan’s support, Lera now has a computer, eye tracker and LINKa device to help her communicate. “Until we started rehabilitation and started using the eye tracker, we almost didn’t communicate at all. I relied on my intuition,” Tatyana told Scenes. “When she was in pain, I didn’t know where she felt the pain, but with the eye tracker her vocabulary is getting wider,” she added.

When Ivan founded LINKa he simply wanted to help bridge the communication gap. Now his work and lifestyle have helped to change the mindset towards people with disabilities. “I (live by) a rather fun motto, ‘We are all going to die one day, so live in the moment,’” he said.

Ivan started living independently two and a half years ago and is a hobby enthusiast. He regularly posts pictures of himself, go-karting, sailing and playing boccia to his thousands of followers on Instagram. “I stopped holding on to the people who only understood my mumbles, and started to get out there. I was able to travel, work and meet new people. It’s a wonderful way to live and I want to give this opportunity to others that also have speech problems,” he said.