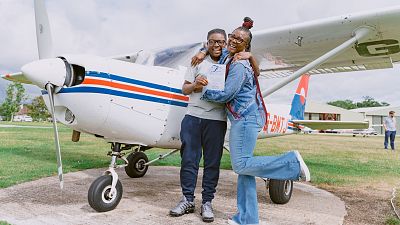 A Fantasy Wings student with his mother after a trial flight   -   Copyright  Chadley Larnelle, Fantasy Wings
By Rosie-Lyse Thompson  •  Updated: 20/10/2021

Jackson Smith loved catching planes when he was young, travelling between his family homes in Jamaica and the UK always fascinated him. “Being on the runway and the plane accelerating and you can feel the full force and power was just always an amazing feeling to me,” the 27-year-old explains.

At the age of eleven, Jackson knew he wanted to be a pilot, but did not receive the encouragement from his school or within his community to do so. “I was told becoming a pilot was not something I can do and maybe I should aim for something that's more realistic,” he told Scenes.

Despite the lack of support, Jackson went on to university and studied Aviation Engineering, and got a job alongside his degree to fund his training to get a pilot’s licence. “When I got my pilot's licence, it was an amazing feeling. It was a sense of affirmation and that I was the one who determined what I could achieve,” he said.

After graduating from university, Jackson was determined to give Black, Asian, and minority ethnic (BAME) children better opportunities so started a mentoring programme. He worked in inner-city London schools to support education and build better relations in local communities.

“I was working with a young man, when he found out that I was a pilot, he told me it didn’t feel like it's something he could do because the people in his community don't tend to have very aspirational jobs, and that really stuck with me.”

To change mindsets, Jackson was inspired to set up a series of aviation workshops. The classes were designed to introduce the children to the airline industry in the hopes of widening their aspirations. The success of the programme led him to quit his job and in 2019 he founded Fantasy Wings.

“I wanted to change the thought process that you can't do something because you're not represented, I want the young people to be the representation that they seek,” he said.

What does the Fantasy Wings programme offer?

Only seven per cent of pilots in the UK are from BAME backgrounds and three per cent are women. Jackson believes that limited financial support and systemic barriers have been key in preventing underrepresented groups from entering the airline industry.

“I want to see organisations taking the initiative to make sure that they have a diverse workforce that is representative of the country that we live in,” Jackson explained. “I want to see systematic change in the availability of opportunities and the availability of funding and scholarships for young people from the black, Asian, and minority ethnic community to allow us to level up and be afforded the same opportunities as everyone else to be represented in this industry,” he added.

Fantasy Wings’ mission is to increase representation from diverse groups. It offers a yearly course that involves workshops, conferences and mentoring led by BAME pilots, engineers and aviation professionals. In the hope of providing young people with the skills and understanding to enter the industry or become commercial airline pilots. The programme is run in cities across England and open to students between the ages of 13 and 25.

“We've had a lot of young people that have said they've gone on to use the interview skills and the skills that we've given them to attain access to cadetships, sponsorships and job opportunities,” Jackson says.

At the end of the year, Jackson gives away trial flights and private pilot's licenses to a select number of students.

The inventor changing attitudes towards people with disabilities