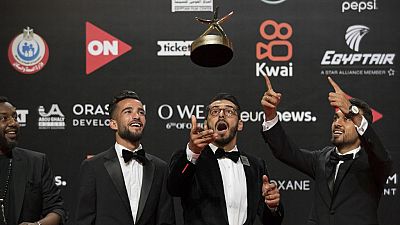 The fifth edition of the El Gouna Film Festival came to an exciting final burst as a host of stars graced the red carpet.

After a week of celebrating Arab film, over 20 prizes were awarded during the last night of the festival on October 22.

The coveted golden award for 'Feature Narrative' went to Finnish director Teemnu Nikki's thriller 'The Blind Man Who Did Not Want to See Titanic', an intense movie shot from a blind man’s perspective.

The film follows the story of a man, Jaakko, who has to go through hell to reach his loved one.

Blind and disabled, Jaakko is tightened to his wheelchair. He loves Sirpa, who lives far away. The two lovebirds have never met in person, but they talk every day over the phone.

When Sirpa is overwhelmed by devastating news, Jaakko decides to visit her immediately despite his condition.

'Best Arab Narrative Feature' went to Egyptian film director Omar El Zohairy’s 'Feathers', which was at the heart of a local media storm for most of the festival after a group of veteran filmmakers, including Sherif Mounir, Ahmed Rizk, and Ashraf Abdel Baqi, walked out of its competition screening complaining the movie was offensive to Egypt.

"I'm so happy to win an award in Egypt, my beloved country," El Zohairy told Euronews. "I'm a product of this amazing country, my film is a product of this great interest in cinema, so I always feel grateful that I have the chance to be part of this cinematic heritage."

"We're very happy the film is here and it (the film's presence in the festival) will help it circulate more and it will help to keep the conversation about the country - Lebanon - more and more alive," said producer Myriam Sassine.

An eerie family drama set amid a raging climate crisis in near-future Lebanon, the movie follows the Badri family who tries to escape the overwhelming pollution and social unrest of Beirut by seeking refuge in a utopic mountain home they built for themselves.

But when an illegal garbage landfill begins construction right next door, so do family tensions.

The family is left with a choice: stay off the grid or leave their idyllic home and face the reality they fled.

The $10,000 (€8,607) prize for best 'Arab Feature Documentary' was scooped by Egyptian director Ali El Arabi for his refugees' tale 'Captains of Za’atari'.

"I'm super happy, but this is not just for me, it's for Mahmoud, Fawzi and Aya Dowara, and all the refugees around the world," expressed El Arabi.

A total of 52 feature films and 23 shorts from over 30 countries were showcased this year.

The fifth edition of the El Gouna Film Festival delivered a diverse programme and shone a light globally on the Arab film industry.

The festival also held workshops and masterclasses for emerging talent – through the CineGouna platform – which supports and funds Arab filmmakers in the region.

After the awards, winners, nominees, and festival guests partied into the night.