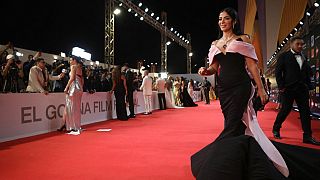 The fifth edition of El Gouna Film Festival has kicked off in Egypt as a host of stars graced the red carpet at the festival plaza.

Disaster nearly struck this year's event after a fire ripped through the red-carpet area around its main open-air auditorium, some 36 hours before its opening ceremony on Wednesday.

Emergency services were quick to respond and there were no major casualties. Locals worked through the night to repair the damage.

The organisers of the film festival extended their gratitude to the Civil Defense Forces and the Red Sea Governorate for their tremendous assistance, in a statement released on Wednesday.

Samih Sawiris, the founder of the film festival, told Euronews he had "never been so proud".

"I have seen those 1,600 and something people yesterday, work nonstop, most of them even didn't sleep. The result is as you can see: you can hardly tell that there was one of the biggest fires in Egypt in the last few years."

The fifth edition will showcase 52 feature films from 36 territories and another 23 short films from 34 countries.

A total of 16 films will compete for El Gouna’s Golden Star award for the best narrative film as well as other prizes.

The film festival is scheduled to take place from October 14 through October 22 in the Red Sea resort town of El Gouna.

As well as celebrating Arab films, the festival also continues to attract submissions from around the globe.

"We believe that this festival becomes a window of our cinema to the world and it is also the door for international films to Arab countries," said festival director Intishal al-Tamimi.

The surrealist story sees a magic trick gone awry at a children’s birthday party with the authoritative father of the family turned into a chicken.

The mother, whose mundane life was dedicated to her husband and children, is now urged to come to the fore and take care of her family.

While moving heaven and earth to bring her husband back and secure their survival, she goes through a total transformation.

The movie follows the story of two best friends, Mahmoud and Fawzi, who live in the Zaatari Refugee Camp in Jordan and share an undying dream of becoming professional soccer players.

Despite being confined under dire conditions, the two boys remain hopeful and practice day in and day out.

"We present refugees in different ways. People don't just ask for help – we have two boys who are super strong, and for me, they are superheroes. They dream a lot, and they are role models for anyone around the world of this age," filmmaker Ali El Arabi told Euronews.

Beyond the short-lived drama of Wednesday’s red-carpet fire, the main challenge for al-Tamimi and his team this year had been to put together a festival against the backdrop of the coronavirus pandemic.

And it seems the festival is on course to deliver its most diverse programme yet.