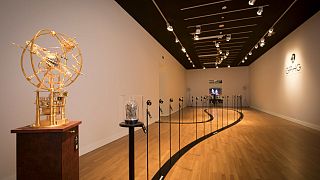 The world's most recognisable luxury companies have once again put some of their best watches forward in the hope of securing one of the coveted prizes at the Geneva Watchmaking Grand Prix — the industry's Oscar.

Eighty-four watches are vying to be recognised as the best in one of the 14 categories — which include Ladies, Men, Jewellery and Diver's — and for the most distinguished prize, the Aiguille d'Or.

The models are being shown to the public at the Musée Rath alongside all the previous laureates of the Aiguille d'Or in a special exhibition to celebrate the 20th anniversary of the Geneva Watchmaking Grand Prix (GPHG).

The GPHG has entrusted craftsman Xavier Dietlin with the task of displaying the watches without a showcase and each of them is cleverly connected to a metal rod to seemingly float in space like a field of reeds. The museum's security was specially adapted for this exceptional exhibition.

The prize-giving ceremony on November 4 at the Théâtre du Léman in Geneva is expected to attract 1,200 attendees.

Created in 2001 by two watchmaking enthusiasts, the GPHG has established itself over the last 20 years — and the creation of its eponymous foundation — as the most international, most recognised, most exhaustive and best-structured watchmaking prize and is now known as the industry's equivalent of the Oscars.

Winning a GPHG prize in one of the categories represents a triple reward: for the public, the winning brands use it in their communications and sales tools; internally, the manufacturer's teams are proud to see their work distinguished in this way; and in the industry, bringing recognition from peers.

A GPHG trophy can therefore make the difference for a customer struggling to decide between two models.

This 20th edition of the GPHG takes place in a very special context.

Last year, the watchmaking sector experienced its worst year since the quartz crisis of the 1970s as shops were ordered closed due to the global health crisis and exports fell by 90% in the spring.

The industry has since recovered to its pre-COVID levels, but in a very uneven way.

During this catastrophic period, strong brands with cash reserves, the likes of Rolex, Patek Philippe, Audemars Piguet and Richard Mille, increased their market share and desirability. But brands already suffering from structural weaknesses or dependent on certain markets did not catch their breath.

The recovery has thus been stronger for brands well established in China and the US, where the take-off has been dazzling. Those more Europe-focused have been more unfortunate as travel retail has not quite recovered yet on the Old Continent.

Yet, a phenomenon unprecedented in its scope has unfolded. Small, well-established contemporary independent brands are experiencing a moment of glory with their order books exploding since last year. These brands include Bethune, FP Journe, Greubel Forsey, H. Moser & Cie or MB&F — all of which have already won prizes at the GPHG — but also the more recent Czapek.

These "small" collectors' brands have proved to be more agile, more desirable and more resilient. Their size has allowed them not to completely shut down their production facilities, and remain in contact with their small networks of loyal customers who were no longer solicited by the big brands.

Almost all of them are also participating in the biennial Only Watch charity auction, which will also be held in Geneva two days after the GPHG ceremony.

A GPHG Academy is now selecting the winners.

"The Academy involves the industry in the selection and voting process," GPHG Director Carine Maillard, said.

"Today we have 500 members of the Academy representing a vast network of ambassadors of watchmaking passion, who participate in all the selections and reward contemporary creations together, contributing to their promotion and influence," she added.

The independence of the jury and the importance of the GPHG have become so important that some brands no longer want to take the risk of participating and not winning.

This is unfortunate for the public as well as for the watchmaking collegiality, especially for an industry whose prestige is inversely proportional to its size — its annual turnover amounts to 20 billion Swiss francs (€18.7 billion) or the equivalent of a single quarter for a company like Nestlé — and which would benefit from speaking with one voice at least once a year in order to attract the attention of consumers so coveted by other, much stronger luxury sectors.

Fortunately, many brands play the game regularly, even unfailingly.

The medal for perseverance goes to Bovet, which participated for 15 years, seeing its watches among the finalists each time, but failing to get a prize until it clinched the Aiguille d'Or in 2018 with its Récital 22 Grand Récital model. This year, the jury again selected four watches from Bovet as it did from Breitling, Bvlgari and IWC.

The prize-giving ceremony will be broadcast live on Euronews on November 4.