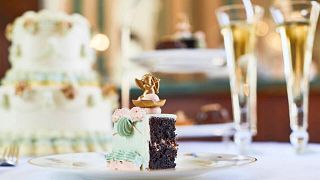 The most fitting place to enjoy a rich chocolate cake decorated in quirky green and pink-coloured icing must surely be a sumptuous Regency setting.

One London theatre is making that happen. Back in January 2019, London's Theatre Royal Drury Lane embarked on an ambitious €71 million restoration project to its former 1812 glory.

Now, the Covent Garden establishment has a menu to match it.

With a modern twist on the outlandish desserts of the early 1800s - such as mini sticky toffee puddings filled with custard - this new Regency-themed afternoon tea is looking backwards as well as forwards. Theatre-goers can now enjoy such lucullan splendour at the heart of London's West End.

Throwing out the rulebook of traditional afternoon teas

The new idea is the brainchild of baker Lily Jones of Lily Vanilli Bakery.

Jones, a self-taught baker, says she "wanted to create an afternoon tea that was really modern and really fun. Decadent, but full of things which are really delicious and things that people actually want to eat in 2021."

Throwing out the rulebook of traditional afternoon teas, Jones has opted to get rid of the typical sandwiches and replace them with puff pastry sausage rolls made with Cornish sausage meat, roast bacon lardons, and a cider vinegar deglaze.

Jones says tantalising the palate is central to her afternoon tea.

"I always think things look good when you know they're going to taste good. So, a slice of cake, you can see what's inside. We've got loads of amazing flavours, we've got custard, jelly, ice cream, sausage rolls. It's like a glorified kids' tea party," she says.

The aesthetics and variety are just as important, Jones says, with the rich Regency history of the Theatre Royal Drury Lane and its recent 60 million British pound refurbishment providing ample inspiration.

But, she explains, she's keen to bring the concept up to date.

"(I) drew a lot of inspiration from the interiors, but most importantly, for the food, I was really looking at what people like to eat now, so visually, it's really Regency, but what's on the stand is designed for 2021," she says.

One of the highlights of the afternoon tea is a handmade Regency-style ice cream trolley serving a new spin on the traditional exotic ices of the times - a heady absinthe mint chocolate chip ice cream set on shell-shaped bowls.

Jones' tea experience was chosen to help bring theatre lovers back the newly refurbished Theatre Royal for a complete evening of sensory joy.

With its glittering chandeliers and soft pink and green marbled room, the theatre's Grand Saloon has had a multi-million-pound refurbishment aimed at bringing new life into the capital's theatre district.

Along with the new menu, Frozen: The Musical recently relocated to the 2,000-capacity theatre after an 18 month closure in performances due to COVID-19.

London's West End has been particularly hard hit by the coronavirus pandemic, with over 95 percent of British theatre organisations reporting being worse off because of COVID-19, according to a survey by the Society of London Theatre (SOLT).

The Theatre Royal is central to London's rich theatre history

The pandemic threatened to derail the theatre's extensive renovation project.

The results aim to recreate the charm of the theatre's heyday - from a vibrant bar named after Oscar-winning designer and costumier Cecil Beaton, to a stylish nook adorned with theatre-related artwork.

At the helm of the ambitious project was Madeleine Lloyd Webber, wife of British composer and theatre impresario Andrew Lloyd Webber, who owns the theatre and six others across the capital.

She wants to persuade visitors to come back to the theatre district.

"We want to, with Drury Lane, set the bar extremely high, we want to be the first five-star theatre destination in the world, frankly," says Lloyd Webber.

Madeleine and her husband have both been keen to encourage audiences back to the theatre and London's West End.

"It brings them in, it uses public transport, it uses the restaurants and the cafes. We've got to make the place vibrant again, and not just the West End, all over Britain."

Amongst the cautiously optimistic are industry experts like Matthew Hemley of The Stage, a weekly newspaper that covers the British entertainment and theatre industries.

"I think right now the outlook for theatre is very positive. And what Theatre Royal Drury Lane is showing is theatres having to think outside of the box a little bit more about how they get audiences back through the doors," he says.

"It is very positive at the moment. Audiences seem really hungry to come back and see live entertainment and to be sitting next to each other in a theatre and enjoying that communal experience. But I think we are worried about the winter months and what restrictions that may bring, especially in terms of more lockdowns or the return of social distancing, which quite frankly, I don't think theatre could face any more of."

Afternoon Tea in the Grand Saloon at the Theatre Royal Drury Lane opened on Monday 18 October 2021.