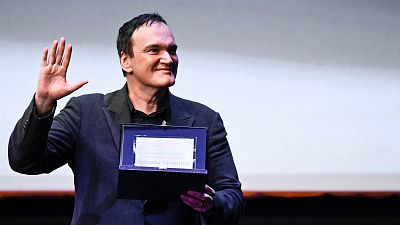 He was awarded by Italian horror filmmaker Dario Argento, behind such titles as 'Suspiria' and 'Deep Red'.

The 58-year-old was there to collect the award with his wife.

"The fact that 30 years later I would be here in Rome and they would give me a Lifetime Achievement Award, and the Rome citizens who’d know who I am, that’s pretty special," Tarantino has said.

In his 30-year career, Tarantino wrote and directed nine hits including 'Inglorious Basterds' and 'Jackie Brown' and most recently 'Once Upon a Time in Hollywood.' The screenwriter revolutionised the way films were made and manipulated plots in new and innovative ways.

He won two Oscars for the Best Original Screenplay for 'Pulp Fiction' in 1995 and for 'Django Unchained' in 2013.

The festival at the Italian capital opened on October 14 with 'The Eyes of Tammy Faye' and runs through October 24. Fellow director Tim Burton will also receive a Lifetime Achievement Award on Saturday.

The official selection of the festival includes 23 films ranging from different genres and different forms of expression. 23 countries participate, including Saudi Arabia, Dominican Republic and Kosovo.

The festival will close its doors with 'Eternals' by Oscar-winning director Chloé Zhao.

Watch the report in the player above.