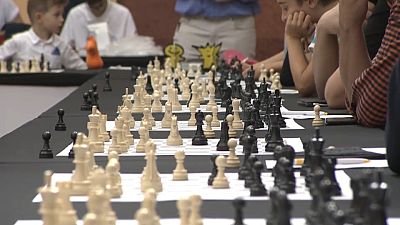 Chess has challenged human minds for centuries, and continues to do so. It is not only a game, but a tool for navigating many different aspects of life, which is why chess grandmaster Judit Polgár is advocating for its use in educational settings.

The Judit Polgár Method was presented at this year's Global Chess Festival in Budapest, an annual one-day festival celebrating the diversity of the game.

Skipping across a chessboard, Polgár demonstrated her latest invention: ChessPE.

A playground is swapped for a 64-square chessboard, inspiring children to master their movements — hopping, jumping, throwing and balancing — while recalling the mental techniques of the game.

The game is also designed to be accessible for children with learning difficulties.

"Here you jump in the squares,” said Katalin Nagy, a special needs teacher, explaining the rules of ChessPE. “You balance, throw the ball into the hoop, run along the diagonals, then back along the golden spots and get off the chessboard on the last golden arrow."

What is the Judit Polgár Method?

Polgár, who is widely recognised as the best female chess player of all time, started developing her teaching method in 2012 with the help of experts and educators. The Method’s aim is to make learning more effective and diverse using chess as a tool, rather than a goal.

“Chess can develop skills such as holistic, logical analysis and systematic thinking, which is pushed into the background with the rise of visual information-based thinking,” the** global Chess Festival** reports.

Alongside ChessPE, the Method’s program includes a Chess Playground for preschoolers and the Chess Palace for those slightly older, both of which provide an alternative way for children to develop general skills, stimulating logical and creative thinking.

Education was at the forefront of this year’s seventh annual Global Chess Festival, which took place on October 9th 2021 and was held in Budapest’s National gallery.

Chess players from all over the world attended, taking part in professional chess tournaments, art shows and educational conferences. There was even the chance to play simultaneous chess with grandmasters like Zoltán Almási.

“It has been a dream of mine to create a forum that makes home for international discussions surrounding chess and education, a forum which showcases how the game can be incorporated into school subjects and brings kids’ strengths to the surface,” said Polgár.