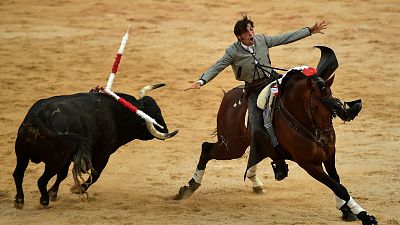 Some forms of the game are considered blood sport, but in Spain bullfighting is a cultural event   -   Copyright  AP Photo
By Shannon McDonagh  & AP  •  Updated: 21/10/2021

The Spanish government is offering citizens who turn 18 years old next year €400 to spend on cultural activities. An estimated half a million teens will be able to get in on the action - providing they don't wish to attend any bullfighting events.

Spain's national budget for 2022 revealed that eligible teenagers could spend their 400 euros on items such as movie and theatre tickets, booksand concerts.

It's a decision that has been praised by animal rights groups and frowned upon by traditionalists - though just 8 per cent of the population are estimated to still attend the controversial spectacles.

The goal is to help Spain's culture-related businesses recover from the loss of revenue during COVID-19 pandemic lockdowns.

The tradition has fallen out of favour with a large section of Spanish society, particularly young city dwellers. The Spanish have gathered to observe the baiting and killing of bulls for over 2,000 years

But now, proposals have been tabled to ban under-16-year olds from attending the sport.

Delegates at the 40th Federal Congress in Valencia will look over potential changes to stop promoting and subsidising the sport as an event of importance in Spain. It has been banned in over 100 towns in the country over the past decade, and a further eight countries further afield, such as Denmark, the UK, and Italy.

There are few visible supporters in Spain's left-leaning coalition government, which is made up of the Socialist party and the United We Can party.

Offering cultural opportunities to young people in this way is expected to cost the state around €190 million.

Conservative opposition parties chided the government for leaving out bullfights. The Fundación Toro de Lidia, which represents the bullfighting sector, complained that Spanish law classifies bullfighting as part of the country's cultural heritage.

The Culture Ministry said in a written note to state-owned news agency Efe that "not everything that our legislation regards as culture will come under this cultural support."

What do animal rights groups think about the move?

"This decision by the Spanish government is yet another indication that the tide is turning against cruel and archaic bullfights," a representative for animal rights organisation PETA told Euronews Culture.

Bulls selected to participate in performances have been known to be drugged, slapped with sandbags, and have petroleum jelly is smeared into their eyes to confuse them. What would in some quarters be deemed a "successful" performance by the matador often leads to the animal's ears being cut off and presented as a trophy.

"Since the overwhelming majority of Spanish people – particularly members of the younger generations – oppose these bloody spectacles in which sensitive animals are tortured to death for entertainment, it’s only a matter of time before the whole country joins the more than 100 Spanish towns and cities that have already declared themselves to be against bullfighting," said the representative.

What happens when Spain's top football league and NFTs mix?