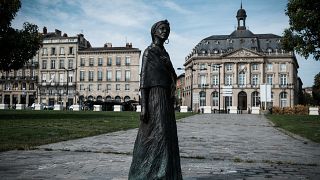 Bordeaux, the French city that was a transit station during the slave trade, feared that racism was behind the disfiguring of an African slave statue when it was covered in what looked like white paint. When the facts came to light, the statue was found to have been disfigured with plaster by an art student, the city's authorities said on Tuesday.

A legal complaint was filed and the statue of Modeste Testas (whose original name was Al Pouessi) was immediately cleaned after the discovery Monday of the vandalism.

On Tuesday, the city of Bordeaux announced that an art student with no racist motive was behind the whiting of the statue, whose head, arms and shawl were covered in plaster. The complaint was withdrawn, but the city denounced the unauthorised act.

“The student (said) that no racist motivation was behind this action,” a statement said, without identifying the student. It added that “this isolated initiative” which disrespects art is unacceptable, “particularly those that honor the memory of victims of crimes against humanity.”

The life-size bronze statue representing a slave bought by two Bordeaux brothers in the eighteenth century and then freed, was discovered Monday whitewashed to the bust. The piece was created by Haitian sculptor Caymitte Woodly, known as Filipo.

Modeste Testas, apparently Ethiopian, was bought as a teenager in 1781 by two brothers from Bordeaux then taken to their sugar plantation in the Caribbean. The statue on the quai overlooking the port had been inaugurated in May 2019 on France’s national day marking slavery, the slave trade and its abolition.

Bordeaux and the French port of Le Havre, further north, were part of a triangle for the slave trade that sent captive black people from Africa to slave owners across the Atlantic Ocean.