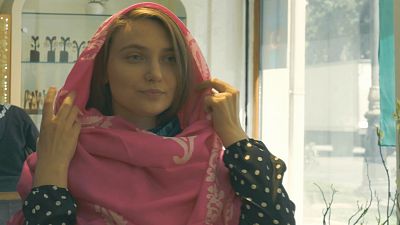 The historic Silk Road city of Sheki in Azerbaijan has long been a centre of silk production and is particularly famous for its headscarves called kelaghayi.

Their fabrication is a painstaking process that demands skill, and plenty of raw material. The main raw material in question is silk.

To make the iconic headscarves, the kelaghayi makers put silk cocoons into boiling water. This helps to soften and dissolve the gum that holds them together. This is a crucial step in the production process as it ensures there is no damage to the continuity of the threads.

Each thread is then reeled from the cocoon in long individual strands, which are then wound on a reel. Although the process is completely automatised today, it is still supervised by a person.

Zaur Yakubov is the Director of the AzerIpek factory that has a full cycle of silk production, from raw material to kelaghayi head scarves. He tells us that "one cocoon produces about a thousand metres of silk thread, and over a thousand cocoons are needed to make just one kelaghayi scarf."

Dyeing the material by hand requires skill and a delicate feeling for the process. Kelaghayi makers use natural colour essences that include barberry, wild apple, saffron, currant and sumac.

The scarves are then hung up to dry.

After the crucial production stages, the scarves are then decorated with special patterns. It's a process that some consider the most important.

In the village of Basgal, Abbasali Talibov, a fourth-generation Kelaghayi artisan, is one of the very few who still retains the art and craft of decoration.

To put the motifs on the Kelaghayi, he uses wooden stamps called galib that are made of pear, nut and wild apple trees.

Although fashions are always changing, Kelaghayi patterns have remained untouched for centuries.

Motifs and patterns are often inspired by plants and geometric shapes. The paisley design is particularly popular at the moment.

From factory to shop

Hayat Khalilova designs and sells Kelaghayi scarves in her shop in Baku. She explains that there is one way to know whether a Kelaghayi is authentic. If it can pass through a ring easily without getting caught or snagged, then it is genuine.

Visitors to Basgal can watch the production process and take part in making the scarves. After experiencing the hard work and skill it takes to make such a cultural gem, they rarely leave the village without buying one.

One tourist in the town of Basgal tells us that what she finds marvellous about Kelaghayi is that they are made by men with their own hands and given to women as gifts. They are also a great gift for mother-in-law's and other girlfriends remarks another tourist.

In 2014 UNESCO recognised the importance of the pretty yet practical Kelaghayi by including them on its list of the world's intangible cultural heritage.