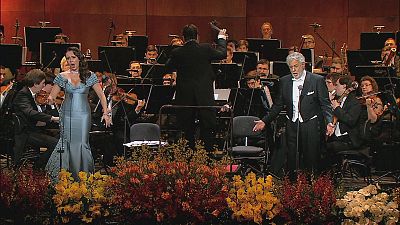 For the dazzling event, covered in this week's Musica, Plácido shared the stage with some of the laureates from his prestigious competition, Operalia.

One of the artists that got to share a stage with Plácido, was Russian soprano, Aida Garifullina.

“Plácido Domingo and I started singing duets together a long time ago. Singing with him is a real pleasure. Apart from the fact that he is a legend, he is a wonderful man, with a very pure soul,” Aida said.

She also shared her sentiment on social media, thanking Plácido for the "magic moments".

Tenor, Javier Camarena, also performed with Plácido Domingo, - and thanked him on social media too for being his "great teacher."

“When I began to study singing, I had no idea about opera. It was when I had an Italian professor for language, he showed us Plácido Domingo singing Turandot. At the end of the opera I was crying I remember. I fell in love with the opera because of Plácido," Javier Camarena told Euronews.

"I mean we use to see him like the god of singing you know, every single time before going on the stage, you know, to see his excitement, kind of nervous a little bit. It is certainly something that really inspires me,“ he added.

Plácido Domingo, the legendary tenor himself, vividly remembers his debut at the Bolshoi - that was more than four decades ago - when he first met his enthusiastic audience.

"There were many, many people. The security were pushing them a little bit and I said niet niet niet, and they stay about an hour and a half, giving me flowers, chocolate. It was amazing, amazing," Plácido Domingo said.

The star also celebrated his 80th birthday this year - and took it in a light-hearted way when speaking to Euronews about it.

"The thing is I like to take it like the French say, you know, the French do say to 'quatre-vingt', which means four times 20,” he said.

This year's edition of Domingo's prestigious competitionOperaliawill be held at the Bolshoi from the 18th to the 24th of October.

Sonya Yoncheva showcases her unique voice in a breathtaking performance