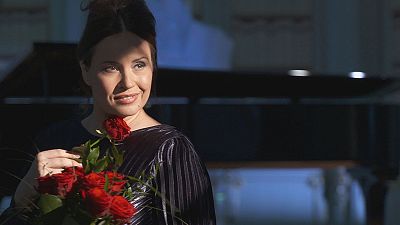 Tantalising Bulgarian soprano, Sonya Yoncheva, takes to the stage of the stunning Kloster Schussenried monastery library in Germany. Her stunning performance highlights one of the singer's musical inspirations: powerful female characters, "women with a story", women "with a lot of material to say something".

From Verdi and Handel to Dvořák and Edith Piaf, Yoncheva's unique voice is accompanied on the piano by Julien Quentin. Her recital has the same enthusiasm as if it were performed in front of a physical audience. Or as Peter Gelb, the general manager of the Metropolitan Opera, describes it, "the singers have the adrenaline of knowing that thousands of people are watching even though they're not in the room with them". It gives the artists "the adrenaline of the live performance where anything can happen".

For Yoncheva, her performance is marked by changes in her personal and professional life. She describes her concert at the Kloster Schussenried monastery as a "very personal programme". She is highlighting her journey from when she left the Metropolitan to her new journey that she will follow with them next season.

"God unites those who love each other"

Her desire to sing powerful female songs, like 'Hyme à l'amour' by Edith Piaf, is partly linked to her personal life. She recently became a mother for the second time and she tells us that "many colours in me changed, I'm another woman, growing, changing every day". But she also says that sometimes she simply must sing a song because she gets "a musical crush" and it's impossible for her not to take it on.

Julien Quentin is a Paris-born, extremely talented and popular pianist. He accompanies Yoncheva's unique voice. His talents extend to playing both as a soloist and as a chamber musician. He tours internationally and has played in places such as the Concertgebouw in Amsterdam, London’s Wigmore Hall, the Louvre in Paris and many more. He created a concert series of music similar to the salons of the Roaring Twenties and has an avid interest in other music genres, including improvisation and electronic.

The Schussenried Cloister monastery in the southwest of Germany has hundreds of years of history. It was founded in 1183 by Premonstratensian monks. But it was partly destroyed by a fire in the 17th century. In the 18th century, architect Dominikus Zimmermann, was commissioned to draw up plans for a new monastery building. His developments were never fully completed due to financial reasons.

Today it is home to architecture and works of art from the late Romanesque era to the Rococo. The highlight of the monastery is the library where Yoncheva performed her concert. This baroque library is flooded with natural light and is ornately decorated.

One of the songs Yoncheva performs is Antonín Dvořák's 'song to the moon' from Rusalka. It's a song that really plays to her ethereal side. She calls it "romantic" and it sits well with "people from the Slavic part of the world", like herself, as they are "very spiritual". Rusalka is a female character from European folklore. She is often malicious to man and she is frequently associated with water. Most European countries have their own variations of how she is depicted.

The Bulgarian soprano's tour-de-force programme can be streamed online until the 12 of March.