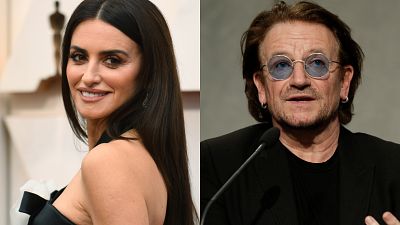 Penelope Cruz, Michael Sheen, David Oyelowo and Bono have teamed up to lend their voices to a new animated web series to raise awareness about the importance of global vaccine access.

'Pandemica' was launched by the ONE campaign, the global health and anti-poverty organisation co-founded by the U2 frontman.

The seven-episode series features the stars as various characters stuck in situations and areas where they are being prevented from getting the vaccine, highlighting the lack of doses available to people in many of the world's poorest countries.

"Pandemica's animated world animates a simple truth - that where you live shouldn't determine whether you get these life-saving shots," Bono said.

"Even while many of us still wait our turn, we need to commit to making sure that billions of people around the world aren't left at the back of the line," he continued.

"It's the right thing to do, obviously, but it's also the only way out of this pandemic for all of us. If the vaccine isn't everywhere, this pandemic isn't going anywhere."

David McNair Executive Director for Global Policy, ONE told Euronews: "the risk is if the virus is reaching anywhere it will mutate and come back and become resistant to the existing vaccines and that's what this animation tries to present".

"You know the kind of scenario that we are looking at now because rich countries are hoarding vaccines is a scenario where the pandemic goes on for a long time" he said.

Cruz said she wants everyone who watches the animated series to "use their voice and take action" to ensure that no one gets left behind.

"Pandemica is a compelling illustration of the inequality around the world," Cruz said.

Oyelowo, who has previously collaborated with ONE to address issues such as poverty, gender inequality, education and healthcare. He voices two characters in the series.

In one of Pandemica's seven episodes, which run about 30 seconds each, Oyelowo plays one of three mountaineers who are taken by surprise when they're given a package with only two vaccines in it.

"They're really great, very short clips that hopefully continue to spread awareness about how careful we need to be with this virus and how much we need to embrace the vaccine," Oyelowo told PEOPLE.

Analysis by ONE found that five countries (Australia, Canada, Japan, UK, and US) plus the EU block of 27 countries have ordered enough vaccine supply to inoculate their entire populations and still have 1 billion doses left over to share.

These excess doses would be sufficient to vaccinate the entire adult population of Africa, it says.

Without global access to vaccines, we could see the death toll double and the global economy stands to lose as much as 7.8 trillion euros, it concludes.

Pandemica is illustrated by British artist Andrew Rae with animation by Emmy-winning indie studio Titmouse and music and sound design by father, and was created and produced in partnership with hive.

Rae told Euronews: "The main thing we were concerned about was making sure as were trying to represent people from different communities and different parts of the world that we didn't resort to a kind of stereotype".

"So by using this kind of cast oddball, weird characters there is a way of difference without resorting to cliches," he explained.

Pandemica is available subtitled or translated in French, German, Italian, Dutch, Spanish, and Pidgin English. You can watch them at ONE's website and Youtube channel.

Limited access to COVID vaccines for Europe's poor: the case of Moldova

Watch: Bono and The Edge busk to raise money for homeless in Dublin