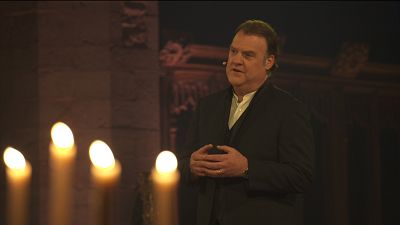 The misty Welsh mountains and a magnificent medieval cathedral are the backdrop to a special Christmas concert this year. World-famous baritone, Sir Bryn Terfel, is putting on a performance from Brecon Cathedral. The line-up includes classic Christmas carols and iconic folk tunes with a distinctly Welsh tone. The concert is being streamed online and is one of many star performances from operatic singers. It's part of The Metropolitan Opera in New York's first-ever series of pay-per-view recitals. The initiative is called 'Met Stars Live in Concert', a concept that came to life due to the current pandemic conditions forcing cultural sites around the globe to close.

Sir Bryn Terfel is Welsh and has always been close to his native land, singing songs in the language and putting on performances for the Welsh National Opera and the Millennium Centre in Cardiff. Brecon Cathedral was thus a natural choice for this Christmas offering. He has had a long extensive career and has received various awards including Grammys, Classical Brits and Gramophone Awards. He also received a knighthood in 2017.

Light in the darkness

While many theatres remain in the dark due to the pandemic, the Metropolitan Opera in New York has found a solution to enlighten audiences. Or as Terfel describes it, “Darkness is another light and that light can give us the possibility to see the stars".

A wonderful festive performance with Sir @Bryn_Terfel@natalyaromaniw for the #metstarslive in Concert from Wales @MetOpera#opera you can still watch it on demand https://t.co/8BBtvbJ0P1pic.twitter.com/gme6wBXaBD

His motivation for the concert; "the people on the front line because their stars have been shining brightly for us through these dark times".

Wales is renowned for its singers. So what is its secret? Terfel says it's down to the country's language, "Welsh has seven vowels, so it kind of lends itself to singing". Or perhaps it's all about practicing? Church was important to Terfel as a child. He describes his farming childhood and says "farms are scattered miles apart from each other. So that was the only sense of community that people had to meet each other was in church”.

But Natalya Romaniw, a young Welsh soprano, says it's something else: “We always say there's something in the water in Wales as to why we breed such good singers. There's a sort of melody within our accent and language. It's a musical language.”

Sir Bryne Terfel's concert is available now until the 30th of December, but many more concerts are to follow. What's the motivation behind the Metropolitan Opera's decision to go online?

“The idea behind the series of pay per view concerts is to connect these great artists with their audiences, which is why we've gone to extreme measures to produce concerts in Europe by remote control from New York, where we are actually directing the camera team and the lighting team three thousand miles away over satellite channels.”