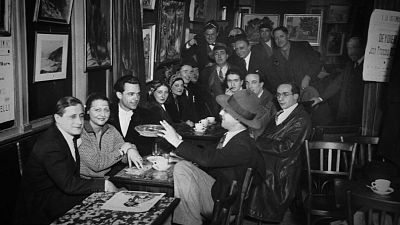 This special edition of CULT coincides with the 100th anniversary of the first wave of Russian emigration and takes a look at the significant impact of Russian artists on the world of culture.

In the aftermath of the Russian Revolution, more than a million Russians emigrated. They were destined to leave their mark in the arts, science and the public life of the countries they arrived in.

Around 50,000 Russians, known as white emigrés, settled in France.

Included amongst this first wave of emigrants was the novelist and poet Ivan Bunin, regarded as the literary heir to Leo Tolstoy and Anton Chekov.

Bunin arrived in France in 1920 and divided his time between Paris and Grasse in Provence. Not only does 2020 mark the centenary of Bunin's arrival, but it is also the 150th anniversary of his birth.

Cafés like La Coupole - which still exists in Paris' Montparnasse district - were at the heart of the intellectual and artistic life of the 1920s and 30s. Bunin would visit La Coupole to write and also to meet up with other Russian emigrés. He mentions the cafe in his short story 'In Paris' as the setting for a meeting place between two of his characters - and the start of their love story.

Bunin was already well known in his native Russia, but it wasn't until he won the Nobel Prize for Literature in 1933 that he gained international recognition.

Professor Foscolo says that the Nobel Prize had a huge impact on Bunin's personal life:

"He became much more popular in media circles.

"Many journalists and literary critics became interested in him, whereas several years before, some of them didn't even know his name. "

As the first Russian to win the Nobel Prize for Literature, Professor Foscolo notes that his success reignited interest in Russian writing:

"We know that Russian writers that preceded Bunin like Tolstoy and Dostoevsky were extremely popular in France.

"With this prize, it was a revival for Russian literature and for its recognition abroad".

Bunin spent more than 30 years living in France - and Lushenkova Foscolo says that time in exile can very much be seen in his writing:

Another leading figure amongst the Russian arrivals in Paris was Serge Diaghilev, who formed the legendary Ballets Russes. The astonishing technique of his dancers and his groundbreaking collaborations with artists like Picasso, Coco Chanel and Igor Stravinsky took Paris and the rest of the world by storm.

"What’s so striking about Serge Diaghilev is that he arrived with this incredibly famous dance company, and created totally new and unprecedented performances that get audiences to see the world in a different way.

“The Ballet Russes created a new style of physical choreography which completely changed the way dancers held themselves; the dynamics, the positioning, the power of each gesture.

"It was completely new and it’s something that’s of huge interest to choreographers today."

The Ballets Russes continued for two full decades, ending only with Diaghilev's death in 1929.

But Diaghilev and his dancers are far from forgotten; the Chaillot theatre is preparing a production of Nijinska - The Woman. The contemporary dance production pays tribute to its namesake Bronislava Nijinska - a ballerina and choreographer from the Ballets Russes. It will be performed at the theatre in March 2021.

Furthermore, today’s Russian artists are carrying on this proud heritage. Based in Moscow, Yuri Bashmet is a conductor and violinist who performs internationally.

He says that Russian musicians and composers have had a significant influence on the international stage:

"What the West receives from Russia is an incredible young energy. After all, we are younger as a nation.

"We Russians offer our soul and we encourage the rest of the world to do the same."

Yevgeny Primakov is the Head of Rossotrudnichestvo, a Russian government agency which is setting up Russian Centres to promote Russian culture, arts and science internationally.

Rossotrudnichestvo actively promotes the Russian education services and extends co-operation with educational institutions of its partner states. It works to strengthen the existing network of Russian compatriots abroad.

Yevgeny says the past is important, but so is the present and the future:

“It's great when people get to know Russian culture through modern day, dynamic examples - not just through the classics.

'I see the aim of Rossotrudnichestvo being an institution for communication and facilitation.”