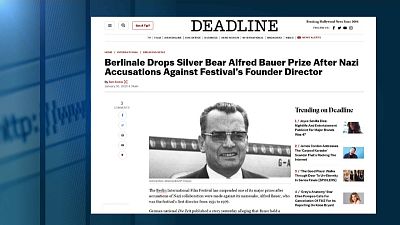 The Berlin International Film Festival has suspended one of its major prizes after allegations that its founding director, Alfred Bauer, was closely involved in organising Nazi propaganda.

Bauer’s controversial past was revealed in an article in Die Zeit, which uncovered historical research suggesting that Bauer was both a member of the Nazi party and a member of the SA, the Nazis’ pre-war paramilitary wing.

Bauer also appeared to be a key part of Goebbels’ Reichsfilmintendanz, a body established by the propaganda ministry in 1942 to control the cinema industry, it is claimed.

In one report drawn up on him for the Nazi party, Bauer was described as an "enthusiastic SA man" whose "political attitudes are impeccable".

Alfred Bauer was the Head of the Berlinale from the early 1950s until the mid-seventies.

Bauer died in 1986 and in 1987 a Prize was created with his name, The Alfred Bauer Prize, which was considered as a special "Silver Bear" award.

This year the Berlinale will run from February 20th to March 1st.