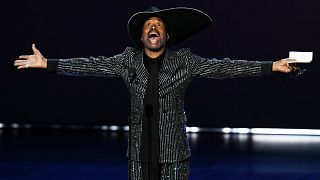 The sweeping, cinematic fantasy saga "Game of Thrones" was expected to conquer the 71st Emmy Awards on Sunday night. But the big winner of the night turned out to be "Fleabag," an edgy and decidedly small-scale portrait of a self-destructive young British woman. The two shows nabbed the top honors, capping off a three-hour, host-free telecast that largely avoided topical gags and kept the focus on what one presenter called the "platinum age" of American television. Here's a look at the five key moments of the night.

Billy Porter moved closer to an EGOT and made history on Sunday, becoming the first openly gay man to win the best actor in a drama trophy for his magnetic performance on FX's "Pose," a series about the drag ball culture of 1980s New York.

The stylish and charismatic performer, who won a Tony Award in 2003 for the Broadway musical "Kinky Boots," received a standing ovation as he took the stage. In a glittering suit, Porter nodded to the awards show milestone.

Here's our coverage of the Emmy Awards as it happened

Phoebe Waller-Bridge's "Fleabag," a dark comedy about a confused young Londoner that began as a one-woman stage show, conquered the major comedy categories. The series claimed the best comedy series trophy, in addition to wins for its direction, writing and Waller-Bridge's bracing lead performance.

"The journey has been absolutely mental to get here," Waller-Bridge said in her acceptance speech, acknowledging the show's humble origins. She also struck a self-deprecating note, acknowledging the string of victories with a quip: "This is getting ridiculous."

Waller-Bridge's success at the Emmys wasn't limited to "Fleabag." BBC America's "Killing Eve," a twisted spy drama that she helped create, earned honors for its lead actress, Jodie Comer. Comer, who co-stars on the series as a deranged assassin, thanked Waller-Bridge in her acceptance speech.

'Exonerated Five' on their feet

In one of the most stirring moments of the night, 21-year-old actor Jharrel Jerome dedicated his Emmy for the Netflix miniseries "When They See Us" to the men falsely accused of rape in the Central Park jogger case.

Jerome, who appeared in the Oscar-winning film "Moonlight," said his award for best actor in a limited series or TV movie was "for the men known as the Exonerated Five." He then listed the names of the five men, who were in the audience at the Microsoft Theater in downtown Los Angeles. They rose to their feet and raised their fists as Jerome shouted the name of the man he portrayed on the show: "Korey Wise!"

"When They See Us," written and directed by filmmaker Ava DuVernay ("Selma," "A Wrinkle in Time"), earned critical praise for its empathetic, unflinching account of the case and its aftermath.

"Chernobyl," another miniseries about a pivotal episode from the 1980s — the 1986 nuclear disaster in what is now northern Ukraine — also received recognition from Emmy voters. The grim HBO docudrama scored the best limited series prize, in addition to honors for its direction and writing.

Patricia Arquette, who won for her supporting role on the Hulu limited series "The Act," was moved to tears in her acceptance speech.

She alluded to the sometimes difficult realities facing actresses in Hollywood, saying earnestly that she was "grateful at 50 to be getting the best parts of my life." She also opened up about grief in her private life, mourning the death of her sister, actress Alexis Arquette.

She lamented that "trans people are still being persecuted," and asked her industry peers to give transgender people more opportunities in entertainment. Alexis Arquette, who was transgender and chronicled her transition in a documentary, died in 2016 at 47.

Michelle Williams also took to the stage with a plea for Hollywood. Williams, who won for her lead role as dancer Gwen Verdon on the FX miniseries "Fosse/Verdon," appealed for pay equity for women.

"The next time a woman, and especially a woman of color ... tells you what she needs in order to do her job, listen to her, believe her, because one day she might stand in front of you and say thank you," Williams said to loud applause.

"Game of Thrones" divided fans and split critics with its polarizing final season. The mixed reactions may have blunted some of its momentum heading into the telecast: "Thrones" picked up only two prizes, for supporting actor Peter Dinklage and best drama series. But the Emmys showered love on the zeitgeist-devouring series in other ways, featuring a clip reel of highlights from the last season.

The audience rose to its feet as an army of "Thrones" stars took the stage.

"Veep," HBO's scathing political satire, also received a hero's farewell after wrapping up in May. Julia Louis-Dreyfus, who racked up six Emmys for her performance as craven political climber Selina Meyer, appeared alongside the rest of the ensemble cast for a special tribute.