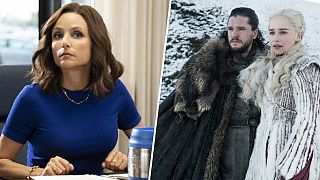 'Game of Thrones' and 'Veep,' two shows that recently wrapped up their runs, are expected to dominate at the Emmy Awards.   -  Copyright  HBO
By Daniel Arkin  with NBC News Entertainment  •  Updated: 22/09/2019

The television landscape is so crowded with new shows and miniseries these days that even the most devoted viewer might find it hard to keep up with the endless stream of debuts. But on Sunday night, two familiar favorites that recently departed the airwaves — HBO's sprawling fantasy epic "Game of Thrones" and the acid-tongued political satire "Veep" — could hog all the glory at the 71st Primetime Emmy Awards.

Here's a look at three key storylines heading into the ceremony, which will be held at the Microsoft Theater in downtown Los Angeles and air live at 2am CEST.

HBO is set to take a victory lap, barring any major surprises. "Game of Thrones" and "Veep," two marquee series that wrapped up in May, are likely to loom large over the night and could notch wins in the top drama and comedy categories.

"Thrones" divided fans and split critics with its polarizing final season, but the show's sterling Emmys track record — it has the most Emmys of any television series in history, 57 — suggests the giants of Westeros won't be easily felled by rivals in the drama competitions. (Although last year, Hulu's dystopian saga "The Handmaid's Tale" upset "Thrones" in the top contest.)

"Thrones," which barrels into the telecast with a staggering 32 nominations, is joined in the best drama race by AMC's "Better Call Saul," Netflix's "Bodyguard," BBC America's "Killing Eve," Netflix's "Ozark," FX's "Pose," HBO's "Succession" and NBC's "This Is Us."

Julia Louis-Dreyfus, who starred on the series as the ruthless pol Selina Meyer, could earn her seventh statue for the role — a victory that, combined with her Emmys for "Seinfeld" and "The New Adventures of Old Christine," would make her the most honored actor in all of Emmy history, according to the Television Academy.

No host, no problem

TV is apparently taking a page from the Hollywood playbook. This year's Emmys, like the Academy Awards telecast in February, will proceed without a host for only the fourth time in its history. (The comedian Kevin Hart stepped aside from Oscars emcee duties amid controversy over resurfaced tweets in which he made homophobic jokes.)

Rob Wade, Fox's president of alternative entertainment, reportedly said the no-host ceremony would free up more time to honor the shows that ended their runs this year. He also reportedly said Fox was eager to mix up the standard formula, especially without an obvious candidate for the job from one of the network's shows.

"We've had great success with a hostless Creative Arts Emmys, and we're happy to give Fox and the production companies freedom to do what they think will be best for the Emmy telecast celebrating the best of television," Frank Scherma, the Television Academy's chairman and chief executive, said in a statement in August.

The absence of a host could help the three-hour telecast feel brisk and snappy, a symbolic win for critics who say major award shows have become too bloated. But the adjusted format could also starve the night of sharp topical jokes that typically crop up during the opening monologue — especially barbs about President Donald Trump, who has said he finds the Emmys "sooooo boring!"

Sandra Oh, an eight-time Emmy nominee who riveted fans of the twisted crime thriller "Killing Eve" in its second season, could become the first performer of Asian descent to triumph in the lead drama actress category. The Korean-Canadian actress, who received five supporting actress nominations for her role in the medical drama "Grey's Anatomy," lost last year to Claire Foy of "The Crown." But she still made a big impression during awards season with a well-reviewed co-hosting stint at the Golden Globes, alongside "SNL" alum Andy Samberg.

Billy Porter, the Broadway star, pop singer and actor who appears on FX's groundbreaking drama "Pose," could become the first openly gay man to claim lead actor honors. Porter, who won a Tony Award in 2003 for his magnetic performance in the musical "Kinky Boots," was also nominated for a Critic' Choice Television Award for his work on "Pose."