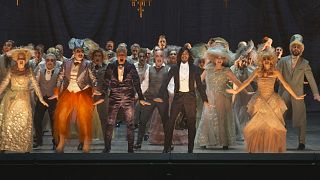 This year marks the 200th anniversary of composer Jacques Offenbach's birth. To commemorate this, director Barrie Kosky has reinvented the artist's famous operetta - Orphée aux Enfers (Orpheus in the Underworld) - being performed at the Salzburg Festival until the 30th of August.

The operetta was first performed in Paris in 1858. It plays off of the ancient legend of Orpheus and Eurydice. In Offenbach’s version, a dysfunctional married couple is separated when the wife, Eurydice, is abducted by the god of the underworld. The husband, Orpheus, has to be cajoled by "Public Opinion" into rescuing his wife.

Offenbach's work, which features the world-famous "Galop infernal" often associated with the can-can dance, was badly received at first but later became a success story and drew in crowds en masse. By its 228th performance, the production had to be interrupted since the singers were exhausted. It has been re-imagined numerous times over the last two centuries and has sustained its popularity.

In this production, Barrie Kosky, the director and artistic director of the Komische Oper in Berlin, essentially stays true to the structure of the original operetta with two acts and two scenes in each act lasting approximately two hours and forty-five minutes in total.

It offers bizarre yet stunning costumes by Victoria Behr and is accompanied by the renowned Vienna Philharmonic, conducted by Enrique Mazzola. In addition: coloratura soprano Kathryn Lewek and tenor Joel Prieto impress in their role debuts.

Joel spoke to Euronews, celebrating the satirical nature of the opera:

"It is so ahead of its time: It's sexual liberation, the sanctity of marriage. It's almost making fun of it. I mean the first scene between Eurydice and Orpheus is a fight between a marriage that is ruined. They hate each other."

Lewek agreed that the show is forward-looking:

“There's this feeling of liberation with her which is irresistible and I think especially thinking about feminism in 2019, it's a continuing fight but in 1858, of course, this was a completely new concept.”

She also shared what she considered to be the show's highlights:

“Musically I'd have to say that my favourite is the end. Eurydice has this liberating moment where she's playing with these dancer boys and there's vocal pyrotechnics and there's visual pyrotechnics. And then, of course, there's the can-can which is so iconic that it's amazing to actually hear it on stage and to hear where it originated in the fabric of the piece.”

This particular production closely entangles theatrics and the music - with precise choreography adding to the frenetic energy throughout the opera. This means the performers have to push themselves physically, according to Lewek:

“The biggest challenge is the athleticism onstage in combination with sounding like [an opera singer]. Most of the time I come offstage and I'm just panting - and water - and I'm sweating. And then to go back out and to keep that energy up throughout the entire show is the biggest challenge.”

With the kind support of the Arcotel Castellani in Salzburg.