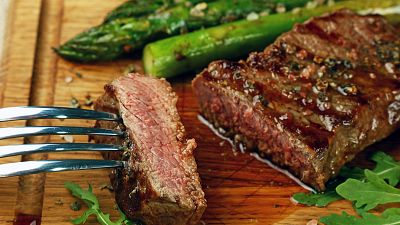 There seem to be a lot of foods that are "back" lately. Fat is back! Bacon is back! Eggs are back! Most of it is fueled by enthusiasm surrounding low-carb diets, Paleo, keto, Whole30, social media and perhaps a boredom with the more traditional dietary options like the Mediterranean diet. That's not a bad thing necessarily because it forces us to think about the fault in our dietary patterns, but as a nutritionist, one trend I am seeing a lot in my patients is the thought that red meat consumption is not as bad as everyone thought it was.

Not so fast: Three new studies show that frequent red meat can lead to disease and an early death. One study found that dietary factors now amount for more worldwide deaths than smoking. Frequent red meat and processed meat consumption were included.

What is processed meat?

Let's first define what red and processed meat actually is. Anything with four legs is considered to be red meat. This includes pork (it's really not the "other white meat"). Bacon, hot dogs and sausage that's derived from pork is considered processed. Many processed meats contain nitrates (which form into nitrites by the body) which alone can have a significant impact on cancer risk.

The new studies are not the first of their kind. In 2012, Harvard published a study showing that just one serving (one hot dog or two slices of bacon) each day of processed meat amounted to a 20% increased risk of cancer and one serving of unprocessed meat (a deck of cards) each day was associated with a 13% increase in risk.

Another recent study found that high intake of red and processed meat was associated with an increased risk of insulin resistance and nonalcoholic fatty liver disease — a potentially life-threatening condition plaguing over one-third of Americans.

Finally, an alarming report from the World Health Organization (WHO) several years ago declared that processed red meat was carcinogenic to humans and that red meat was probably carcinogenic. This prompted trade and watchdog groups to recommend actual cancer warnings on hot dog and sausage packages.

Bottom line: There does not seem to be a lot of health benefits from having red or processed meat as a regular part of your diet.

What is so bad about red and processed meat?

The truth is, scientists aren't 100% sure, but some experts point to the fact that the iron in red meat is a big part of the problem. Heme iron (the type of iron only found in meat) has been associated with an increased risk of diabetes and it has been found that heme iron increased the risk of heart disease by over 50%. Heme iron was also found to increase the risk of certain cancers such as colon and stomach.

Another component has to do with a chemical that is produced in the gut and associated with heart disease and clotting called trimethylamine N-oxide, or TMAO. TMAO levels were found to be three times higher in meat eaters than in individuals who obtained their protein from chicken or plants. There have also been studies linking higher TMAO levels in individuals consuming foods high in choline (like eggs) as well. These studies seem to point to the fact that a lot of meat in the diet can impact gut bacteria and the levels of this chemical.

The nitrates and nitrites used in processed meat, however have more clear associations in the data to cancer formation.

Does the risk of meat consumption go down with when the animals are either grass-fed, wild or unprocessed?

A 2018 study found that when individuals consumed a Mediterranean style diet that included 3 ounces of red meat per day, they still reduced their overall risk for heart disease. The caveat was this: The red meat had to be unprocessed.

Since the World Health Organization linked cancer to processed meats, the availability of options of hot dogs, sausages and deli meat made without nitrates or nitrites has increased. Instead, many manufacturers use celery juice (a natural alternative) instead. However, scientists point out that it is unclear if natural forms are any better than the artificial options — especially since the primary risk of nitrates occurs when they are heated at high temperatures and form into nitrosamines.

Wild game options (such as elk or buffalo) are leaner, and grass-fed red meat may be higher in omega 3 fatty acids and lower in saturated fat. Perhaps they are better options from a nutrient density standpoint, but still standing on four legs.

How much is too much?

With both red and processed meats, the more servings per week you have, the more risk of developing cancer goes up. Therefore, if you love your meat, aim for wild or grass-fed in a limited capacity and curtail your processed meat consumption as much as possible.

Choose plant-based options when you can.

The recent Harvard study showed that replacing red meat with more high-quality plant proteins such as legumes, soy and nuts could lead to less risk factors for heart disease.

But people still love their burgers — and startups have now provided them with options that give them the look, smell and taste they are craving without the animal associated with it. It's a step in the right direction, but the products are still new and it will most likely take years, and research, to understand just how they will impact the health of our nation. One thing is clear though — multiple studies show that eating less meat, and more plants may result in significant improvements in our environment.

Americans will probably never give up their meat habits entirely but as the studies point out, even small changes may lead to a longer life. You can still have bacon, but try to limit it to an occasional indulgence.

One minute it's cancerous, next it's fine? What red meat studies really tell us ǀ View