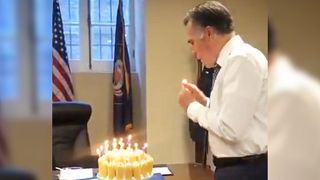 On Tuesday, the senator's 72nd birthday, Romney's team surprised him with a cake made entirely out of his "favorite snack," Twinkies. (His favorite meat is, by the way, hot dog.) In a video shared on his Twitter account, Romney appears delighted as the cake enters the room.

Just saying: Twinkie "Hot Dogs" would have been even better.

He laughs as he exclaims, "Oh my goodness! What I've always wanted! Look at that! Holy cow! That's fantastic!" (Props to his staffer, Paige, who apparently "designed" it.)

And we're feeling genuinely happy for him — finally, his wildest food dreams have come true! — that is, until the mayhem that unfolds next.

Instead of taking a deep breath and blowing out the lit candles in one go, Romney proceeds to carefully remove each candle from the cake, one by one, and blow them out individually.

While birthdays are always a wonderful occasion to celebrate (as are Twinkies), the reaction on Twitter has been, overall, less than celebratory.

Writer Kurt Andersen thinks the act looks like it came straight out of "Parks and Recreation."

Since TODAY Foodhas yet to hear back from Sen. Romney, or his aides, as to why on Earth he employs this candle-blowing technique, we can only theorize.

Theory 1: He believes he gets more wishes this way.

This is the most plausible theory. "These are all the wishes I'm doing," he tells his staff, as he's halfway through the candles. So, does this mean he gets as many wishes as there are candles? Or does it mean he wishes for the same thing over and over again? Does that increase the probability, in his mind, that his wish will come true?

Theory 2: He was afraid he wouldn't blow them all out in one breath.

Because, as everyone knows, it can be mortifying to huff and puff out dozens of candles. But not as mortifying as what he ended up going with.

Theory 3: He didn't want to spread his germs.

This is the most considerate theory. No one likes slobber on their slice of cake. But, as one is able to note in the video, he's still blowing toward the cake.

Regardless of the senator's reasoning behind his mind-blowing candle-blowing technique, we've said it once and we'll say it again: Politicians and "relatable" food stunts do not mix. Please recall New York mayoral hopeful Cynthia Nixon and her blasphemous bagel order; Mayor Bill de Blasio eating pizza with a knife and fork; and former Ohio Gov. John Kasich stuffing his face with Italian sandwiches on Arthur Avenue.

If we could wish on all the individual candles in the world, we would wish for a way to blow them all out at once. Oh, wait ...