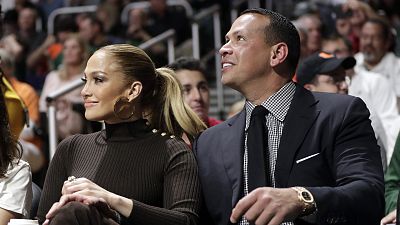 Jennifer Lopez and Alex Rodriguez are taking their two-year romance to the next level with an engagement, the former New York Yankee announced on social media Saturday.

"She said yes," Rodriguez wrote on Twitter and Instagram in posts accompanied by a photo of a woman's hand adorned with a massive diamond mounted on a ring.

Last year, he discussed their compatibility on "Today."

"We're in our 40s. We're both in New York. We're both come from Latino backgrounds. We both have two kids. I think we've both been through a lot and can really appreciate each other, both the good and the challenges," he said.

After a storied and record-setting career with the New York Yankees, Rodriguez retired from the game in 2016.

Lopez, a star of pop music and movies, appears as a judge on NBC's "World of Dance," which pits top dancers across the globe against each other in a contest for fame and a $1 million grand prize.

Last year Rodriguez told "Today" hosts Kathie Lee Gifford and Hoda Kotb that his two daughters from an ex-wife were growing up too fast. He said he wished the girls, 10 and 13 at the time, could "slow down."