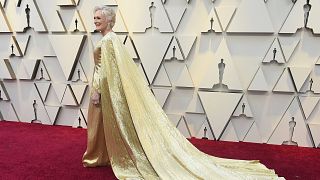 Every star wants to take home the gold on Oscar night, but at the 91st annual Academy Awards, Glenn Close had a different tactic.

She brought the gold to Hollywood's biggest bash — and a lot of it!

The veteran film star, who's been nominated seven times and still hasn't won an Oscar of her own, arrived at the Dolby Theatre in Los Angeles in a hand-embroidered gown by designer Wes Gordon for the House of Herrera that sparkled more than any trophy.

It also weighed more than any trophy.

The long-sleeved wrap gown came complete with tuxedo-style pockets and a formidable cape train. Oh, and something else, she shared with E! News: 4 million beads.

While those shiny beads were tiny, all together, they added up to a whopping 42 pounds of pure fashion.

And the 71-year-old star worked every ounce of it on the red carpet.

Gown creator Gordon shared a shot of Close on Instagram from when he first began to work on the dress, with only a small swatch of metallic glory pinned to the piece.

"Working with @glennclose over the past several weeks has been the most incredible experience," he wrote. "She is brilliant in every sense of the word. With films like 'Fatal Attraction,' 'The Big Chill,' 'Dangerous Liaisons,' '101 Dalmatians,' and now 'The Wife,' she has entertained and inspired the world for nearly fifty years."

And while her performance in "The Wife" didn't earn her the best actress honor Sunday night, she was definitely a winner all the same.