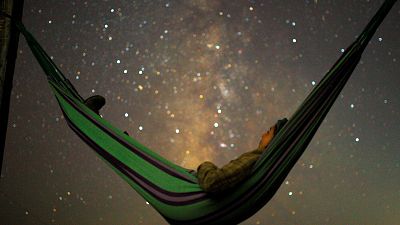 A girl lies in hammock as she looks at the milky way during the peak of Perseid meteor shower in Kozjak, Macedonia, on Aug. 13, 2018.   -   Copyright  Ognen Teofilovski Reuters file
By Sarah DiGiulio  with NBC News Better  •  Updated: 20/02/2019

Maybe you've felt it standing on the rim of the Grand Canyon. Maybe it happens when you think about the vastness of space or glance up at the sky and marvel at a supermoon. Or maybe you feel it when you see someone offer up a seat on a crowded train to another individual they've never met.

The emotion is awe. And, psychologists say it can play an important role in bolstering happiness, health and our social interactions — and it may have actually long played a role in how and why humans get along and ultimately cooperate with one another.

"People feeling awe focus more of their attention outward and value others more in social interactions," Jennifer Stellar, PhD, assistant professor in the Psychology Department at the University of Toronto, tells NBC News BETTER. (Stellar has also studied the effect of awe on the body's immune system. More on that below.)

She and other psychologists and neuroscientists who study awe define it as the emotion we feel in response to something vast that defies our existing frame of reference in one area or another, and leads us to change our perception of that frame of reference. It comes from one of the oft-cited papers on the topic published in the journal Cognition and Emotion in 2003.

"It's how we respond when we see something new or novel that doesn't fit with our understanding of the world," Amie Gordon, PhD, Principal Research Scientist in the Emotion, Health, and Psychophysiology Lab at University of California-San Francisco, tells NBC.

And it changes us.

How experiencing awe bears on wellbeing

One important distinction between awe and other emotions (like inspiration or surprise) is that awe makes us feel small — or feel a sense of "self-diminishment" in science-speak. And that's good for us, Stellar explains.

We spend a lot of our time thinking about what's going on in our world and what's affecting us directly. "Awe changes that, making us see ourselves as a small piece of something larger."

Feeling small makes us feel humbled (thereby lessening selfish tendencies like entitlement, arrogance, and narcissism). And feeling small and humbled makes us want to engage with others and feel more connected to others, Gordon adds.

"All of that is important for wellbeing," she says.

Data from a 2018 study that both Stellar and Gordon worked on found that individuals who reported experiencing awe more often in their daily lives were rated more humble by their friends. And after participants experienced awe as part of the study (by watching awe-inspiring videos), they acknowledged strengths and weaknesses in a more balanced way and they were more likely to recognize the role of outside forces (such as luck, a greater being, or others) in their personal accomplishments (such as getting accepted into a university), compared with individuals who had not watched awe-inspiring videos.

These effects of feeling small, feeling humbled, and the desire to connect with others, according to evolutionary scientists, is thought to be part of the reason over the course of human history mankind has formed groups, societies, and lived collectively.

"The idea is that awe makes us more likely to go along with what [we] need to do to maintain social harmony," Gordon says. (Though she adds that as with all evolutionary psychology, such theories can only be tested indirectly.)

Other research from Stellar's and Gordon's team found that people who reported experiencing more awe also appeared to have better immune health. In a group of 94 students, those who reported more regularly feeling more positive emotions than negative emotions had lower levels of chronic proinflammatory cytokines.

Pro-inflammatory cytokines can be helpful in certain scenarios, if the body is injured or sick, but chronically elevated levels of these molecules has been associated with several chronic conditions, like diabetes, heart disease, and depression. Awe was the single positive emotion most likely to be linked to these lower levels of proinflammatory cytokines on a chronic basis.

The potential for awe in addressing big, societal problems

In addition to bolstering wellbeing on an individual level, awe may help answer some bigger societal problems, too, adds Craig L. Anderson, PhD, a psychology researcher at the University of California-San Francisco.

Research from his group involved taking a group of military veterans and a group of youth from underserved communities on a white water rafting trip to study the effect of nature (which people commonly report feeling awed by) on the wellbeing of those individuals. For everyone symptoms of PTSD went down, while scores of general happiness, satisfaction with life, social wellbeing, and how connected people felt to their community, all improved, Anderson explains.

Other research from Anderson's group (which he notes is currently undergoing peer review and is not yet published) suggests that more awe-prone people are more curious — as deemed by both themselves and their friends — and that this awe-curiosity duo may bolster academic achievement in grade-school children (as it has been linked to higher self-efficacy, work ethic, and academic performance).

"These are big societal things," he says. "And this work is showing how important these experiences of awe can be for people in their own lives," he says — whether that be helping veterans heal or lessening some of the forces that drive disparities among underserved communities.

How to experience more awe every single day

Again, let's drive home the point that you don't need to take a flight in space or even take a white water rafting trip to experience awe. You can experience awe at varying intensities, and in your own ways: listening to a moving piece of music, seeing a giant skyscraper, or reading a newspaper story about a local hero.

Fundamentally, awe is about novelty and vastness, Gordon says. Physical space might create that vastness, as can someone's talent or someone's goodness, she says.

And negative experiences, too, can trigger awe (think natural disasters), Gordon adds — though which benefits such moments come with is yet unclear, she says.

There's no perfect formula for what might elicit awe from you (because it's different for everyone), but there are some things you can do to help you run into it more often:

Research shows that people consistently rank nature as one of the top ways that they experience awe, Gordon says. Try getting to a place where you can get a vast view of your environment (such as climbing a mountain or even getting to a the top floor a high building), she says. Or just take a walk in whatever nature is around you and try looking for something you've never seen before, she says.

2. Get out of your comfort zone.

Novelty is a big part of awe. Visit somewhere in your town or city you've never been. Try something new. Read about someone you don't know much about, or a biography of someone who inspires you, Gordon suggests.

Sure, you can experience awe watching a film showing the world's tallest mountain or listening to a recording of a symphony. But those encounters likely pale in comparison to the magnitude of awe you'd feel had you had those experiences in real life, Anderson says, making the case for taking time to experience awe in 3-D. "Your phone will never be as intense as actually being there in person."

Take in the sites and sounds around you. And look up from your phone and other distractions.

Part of the experience of awe is that feeling of smallness that cause you to rescale yourself — or see yourself in a different light, says Beau Lotto, PhD, a neuroscientist at and founder of the private, experimental research lab, the Lab of Misfits.

Lotto and his colleagues recently partnered with the Cirque du Soleil Entertainment Group to observe how the company's live performances elicit awe and how it changes brain activity. (They're findings suggest when people report experiencing awe mapped to changes in patterns of brain activity linked to being more willing to take risks and being more comfortable with uncertainty. The data has not yet been peer-reviewed or published in an academic journal.)

Lotto's advice for feeling more awe therefore is to engage with the world with a more open mind, see possibilities, ask questions, and look for the impossible.

MORE TIPS FOR A BETTER DAY