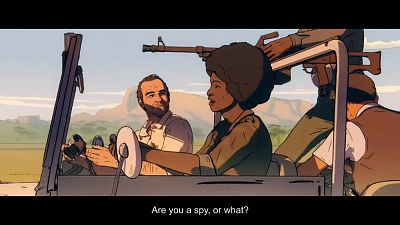 This year's European Film awards prize for Best Animated Feature went to "Another day of Life", set in the Angolan Civil War.

The film is based on a novel by Ryszard Kapuściński, a Polish journalist, photographer, poet and author, and was compliled over three months of the war via his correspondence with the Polish Press Agency.

The bloody war was used as a surrogate battleground for the Cold War by, at the time, rival states such as the Soviet Union, Cuba, South Africa and the United States.

The movie is a co-production between several European countries and got its financing at the pitching & co-production forum "Cartoon Movie".

"I thank the European Film academy of course. I'd like to thank our big international team, you know all these artistes from Poland, Belgium, Spain, Hungary and Germany, 500 people. I love you guys - you are absolutely the best," said Polish director Damien Nenow on receiving the award.

The film mixes animation and documentary film elements, and is a collaboration between Nenow and Spanish Film director Raúl de la Fuente. It's a conventional graphic novel but with unconvential themes.

"Raúl de la Fuente popped up at our place saying 'let's make an animated film lets mix it with documentary.' We felt like this is totally crazy, it could not be crazier. But then if you know writing it was so natural to mix fiction and poetry with facts and undeniable truth and this is what we did, but it was risky," said Nenow.

Writer Ryszard Kapuściński died in 2007, but received many awards and was considered a candidate for the Nobel Prize for Literature.

The movie is already out in various European countries, with a wider release coming in January.